Under a new Wisconsin law, hunters of any age can carry a weapon and participate in a mentored hunt.

And 6-year-old Lexie Harris is among the first minors to legally shoot and kill a deer in the state, the Associated Press reported.

Wisconsin Gov. Scott Walker signed the bill into law on Nov. 12, and the first day of the 2017 hunting season in Wisconsin was on Sunday. That’s when Lexie and her dad went hunting. 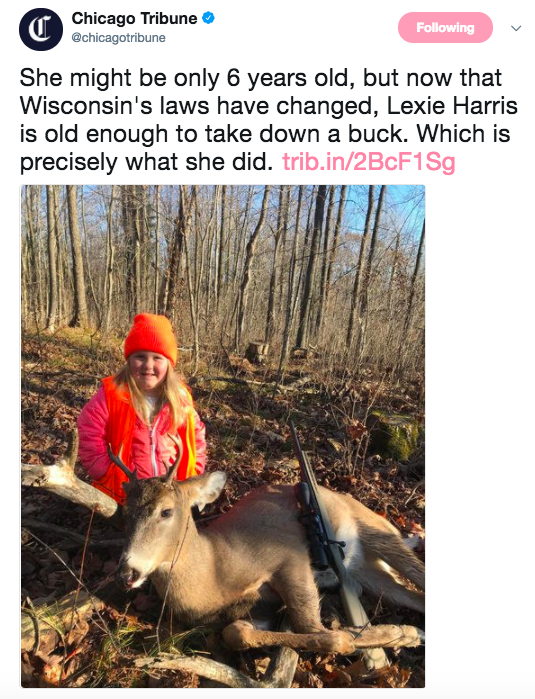 Lexie has gone hunting with her dad since she was 3 years old. Tyler Harris gave Lexie a youth rifle, the AP reported, which is “easier to handle and less powerful.”

“He also attached a smartphone to the gun scope to make it easier to train the firearm on her target,” the AP reported.

The two went hunting on Nov. 19 in the woods near their home in Taylor County, Wisconsin; Tyler Harris built a heated hunting enclosure, the AP said.

“Harris carried his daughter’s gun. They saw several deer during their time in the wooded shelter, but waited for the one that would provide a good shot, Harris said,” the AP reported.

That’s when a six-point buck came into view, and Tyler Harris helped Lexie set up to shoot it.

“She was shaking,” Harris told the Associated Press, adding that “he told her she could take a shot, but only if she wanted to.”

Lexie shot and hit the six-point buck, and the pair located the carcass not far away from where it was shot.

‘”She looked at me right away and said, ‘I’m not gutting it because that’s gross,'” Harris said, the AP reported.

Lexie’s grandmother, Karen Zubke, said she’s glad her son believes his child doesn’t have to be a boy to hunt.

“He beams,” Zubke said describing her son. “He’s so proud of her.”