The 11 deadliest mass shootings in modern US history

Sunday’s horrific attack in Sutherland Springs, Texas, bears the unfortunate distinction of being one of the deadliest mass shootings in US history.

The shooting left at least 26 people dead and 20 injured after a gunman opened fire at First Baptist Church, where parishioners had gathered for a service.

The attack took place just one month after a shooting at a country music festival in Las Vegas, which became the grim new benchmark for American mass shootings. Nearly 60 people died in that attack, and more than 500 were injured.

Here are the 11 deadliest mass shootings in modern US history:

A lone vase of flowers left on Las Vegas Blvd. and Reno Ave. for the victims of the mass shooting on Oct. 2, 2017 in Las Vegas, Nev. (Marcus Yam/Los Angeles Times/TNS)

In October, gunman Stephen Paddock opened fire on a crowd attending the Route 91 Harvest festival from his 32nd-floor room at the Mandalay Bay Resort in Casino.

The rampage lasted more than 15 minutes as panicked concertgoers tried to take cover, unaware of where the fire was coming from.

A police SWAT unit broke into Paddock’s room and found the suspect dead by suicide.

Before Las Vegas, the deadliest mass shooting in US history was the 2016 shooting at Pulse, a gay nightclub in Orlando, Florida.

Gunman Omar Mateen killed nearly 50 people at the nightclub before he was killed by Orlando police. As the club was hosting a “Latin Night,” many of the victims were Latino.

During the shooting, Mateen called Orlando police and swore allegiance to the ISIS, although authorities found no evidence of communication between the terrorist group and the attacker. Still, the shooting drew swift condemnation from American Muslims. It remains the deadliest act of terror in the US since September 11.

The 2007 mass shooting on Virginia Tech University’s campus remains the deadliest school shooting in US history.

Gunman Seung-Hui Cho, a senior at the school, killed more than 30 students and instructors in two separate attacks about two hours apart before committing suicide. 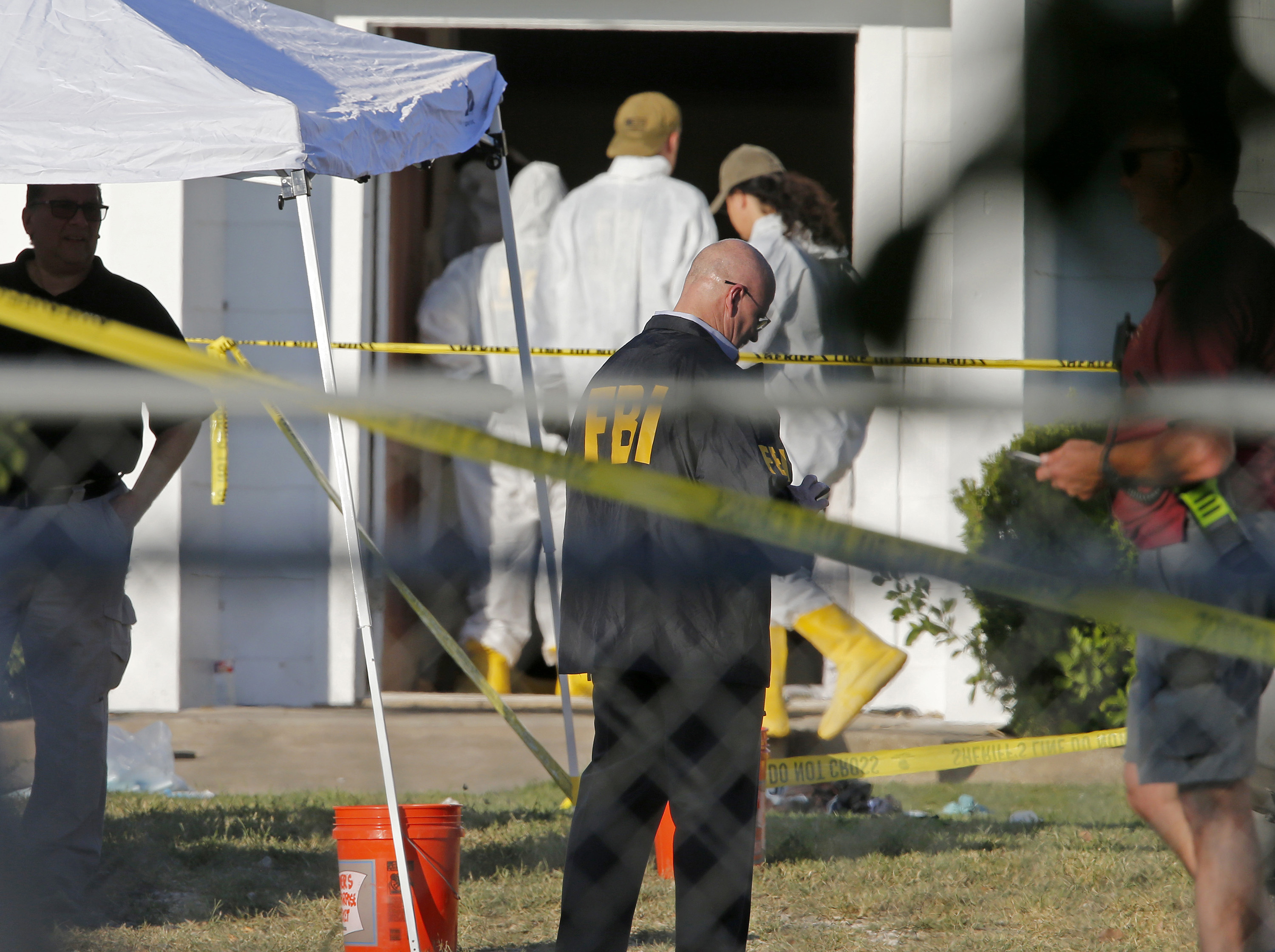 A gunman wearing tactical gear and wielding a semiautomatic rifle opened fire on Sunday at the First Baptist Church in Sutherland Springs, Texas, a tiny town of 1,000 east of San Antonio.

At least 26 parishioners were killed in the attack. Victims ranged in age from 18 months to 72 years.

The shooting supplanted the 2015 shooting at a Charleston, South Carolina, church as the deadliest mass shooting to take place at a house of worship in the United States. 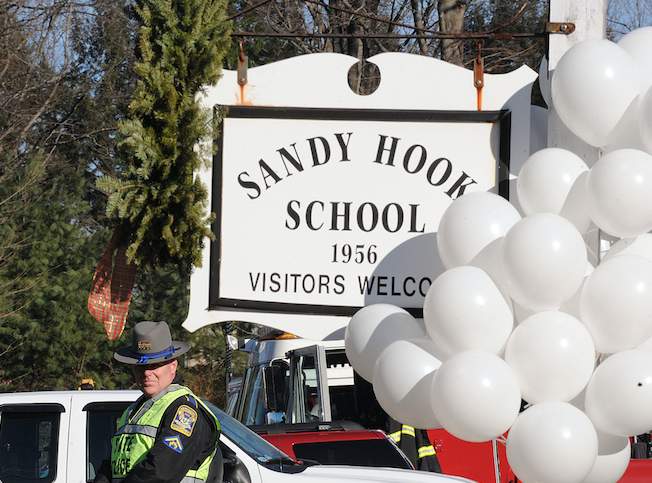 Police officers stand at the entrance to the street leading up to Sandy Hook Elementary School on Saturday, December 15, 2012, in Newtown, Connecticut, a day after a shooting where 26 people died. (Olivier Douliery/Abaca Press/TNS)

Twenty students and six teachers were killed in a shooting at Sandy Hook Elementary School in Newtown, Conn. in 2012. Each student casualty was between the ages of 6 and 7.

Minutes before he went to the school, the gunman, 20-year-old Adam Lanza, fatally shot his mother at their home. Lanza committed suicide as first responders arrived at the school.

In 1991, George Hennard drove his pickup truck through the glass front window of a Luby’s restaurant in Killeen, Texas, and began a shooting rampage on patrons and staff inside.

He killed 23 people and injured 27 more before fatally shooting himself.

41-year-old James Huberty shot 40 people at a McDonald’s restaurant in the San Ysidro district of San Diego in 1984. The casualties included an 8-month-old boy and a 9-year-old girl, and the wounded included a 4-month-old girl.

The rampage ended when Huberty was shot by a San Diego SWAT Team sniper perched on a nearby roof. The shooting prompted changes to the police department in how it responded to mass-shooter scenarios. A frame from a newscast reporting the mass shooting at the University of Texas on August 1, 1966. (Screenshot/NBC)

On a hot summer day in 1966, a military-trained sniper shot dozens of people from the observation deck of the University of Texas’s main building, known as the Tower.

The shooting lasted more than 90 minutes, as officers responding to the attack were forced to move slowly and take cover often. Police got assistance from Texas students, who attempted to pick off the shooter from the ground with hunting rifles, restricting him to shoot through drain spouts for much of the attack.

Local police officers stormed the Tower and fatally shot the gunman. The incident spurred the creation of SWAT teams, and has drawn comparisons to the Las Vegas shooting because of the gunman’s high vantage point.

In 2015, married couple Syed Rizwan Farook and Tashfeen Malik opened fire at Inland Regional Center in San Bernardino, California, where Farook worked as a health inspector. The couple also planted three homemade pipe bombs in the building, though they failed to detonate.

The couple fled the scene in a vehicle and were killed by police four hours later. The FBI found that the two US citizens were “homegrown violent extremists” and were inspired by foreign terrorist groups.

Part-time mail carrier Patrick Sherrill shot 20 postal workers, killing 14 of them, at a US Post Office in Edmond, Oklahoma, in 1986. The attack ended when Sherrill fatally shot himself in the head.

The gruesome attack was the first of a string of homicides by postal workers between 1986 and 1999, and inspired the expression “going postal.” 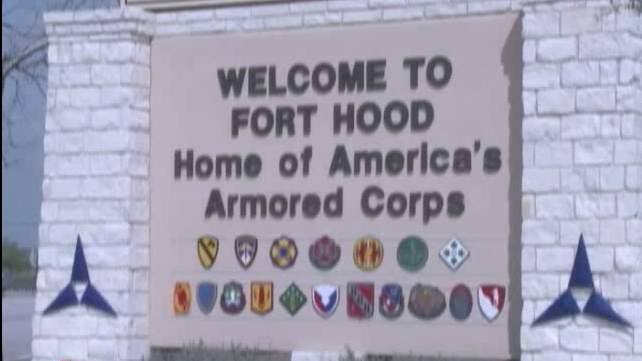 In 2009, Nidal Hasan, a US Army major and psychiatrist, fatally shot 13 people and wounded 30 others at Ford Hood, an army base near Killeen, Texas. It was the deadliest mass shooting to take place on a US military base.

A civilian police sergeant shot Hasan, paralyzing him from the waist down and ending the shooting. Hasan was sentenced to death in 2013 and remains in prison to this day.

Five years later, in 2014, Fort Hood was the site of a shooting spree that left three people dead and 14 wounded.

JPMorgan found that veteran-owned businesses have big plans for the future — and now it's backing them with $4.2 million