A Somali refugee who raped and robbed two women in 2011 when he was 14 years old won’t face any time in prison, the Salt Lake Tribune reported. 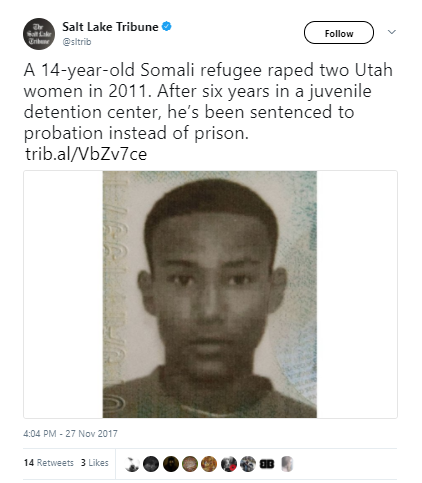 Mohammed was due to “age out” of the juvenile detention system next month when he turns 21, but Judge Vernice Trease decided to release him on five years probation as opposed to time in prison.

Trease said she “won’t bat an eye” in sending Mohammed to prison if he violates his probation, which requires weekly check-ins with the court and his probation officer, as well as having no internet access and wearing an ankle monitoring system, the Salt Lake Tribune reported. 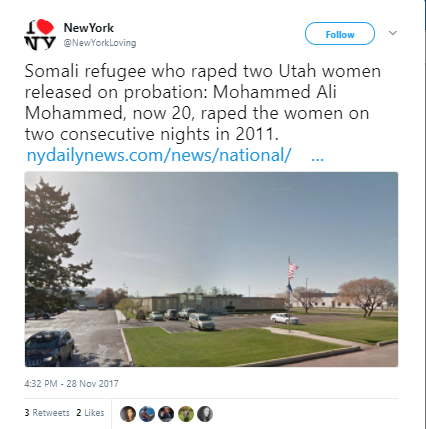 The sentence comes as a harsh defeat for the victims, who wanted Mohammed sentenced to prison time.

“He did adult crimes,” one of the victims told the judge, “and should have an adult sentence to match what he did.”

The woman was raped after Mohammed broke into her home and held her at knife-point, and forced her to go to an ATM and take out $400 cash for him.

The night before that, Mohammed came up from behind another woman outside her house with a dog and held a switchblade to her throat. He told her he would cut her if she screamed and then proceeded to rape her behind the home, the Salt Lake Tribune reported.

Prosecutors said one of the victims, a college student at the time, had a hard time after the incident and fell into drug use shortly after the assault.

“We just lost track of her,” Prosecutor Coral Sanchez-Rose said. “I don’t know if she’s homeless, I don’t know where she’s staying at; we’re unable to contact her. Clearly, this has had a great impact in her life.”

Staffers and volunteers at Wasatch Youth Center came to the support of Mohammed, saying that he has changed in the past several years and is now a leader at the detention center.

He has a “kind and gentle soul,” said Robert Crawford, a branch president for The Church of Jesus Christ of Latter-day Saints, according to the Salt Lake Tribune.

“I would trust him with my life,” Crawford said, “and we want to continue to help him. We will do everything in our power to help this young man.”

Mohammed moved to the U.S. in 2010 after being born in a Somali refugee camp where he was a victim of sexual abuse and saw his brother get killed by a robber, according to earlier testimony.

During a court hearing on Monday, Mohammed called himself a “monster” for assaulting the two women.

“There is nothing that I could say or do that could restore what I did to them,” he said. “The only way I can show them I’ve changed is how I live my life.”