Prime Minister of Canada Justin Trudeau announced in Parliament last week that ISIS fighters returning to Canada who broke Canada’s anti-terrorism laws would be prosecuted, but he also announced that the government would try to reintegrate them into society.

“We recognize the return of even one individual (who joined the ISIS group) may have serious national security implications,” Trudeau said. “We are going to monitor them. We are also there to help them to let go of that terrorist ideology.”

Public Safety Minister Ralph Goodale said the chances of rehabilitating the returning ISIS fighters is “remote” because it is too late for an intervention. 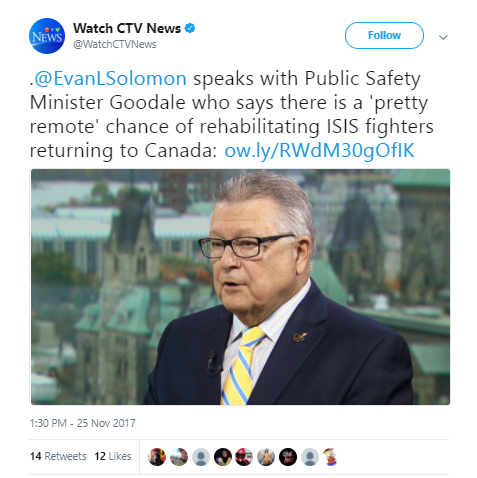 “If you want to have a good solid hope of some kind of successful intervention, it has to be at a much earlier stage. You have to prevent the problem before it exists,” Goodale said.

“Once a person has been in a war zone, once they’ve been actively engaged in terrorist-related activities, the capacity to turn them around is pretty remote. That’s why you have to use the other tools, including collecting the evidence and prosecuting wherever and whenever you can,” he added, admitting that pursuing charges on returning ISIS fighters would be difficult due to having to translate intelligence into evidence.

Goodale told the House that “the number of returnees is in the order of 60,” a number that hasn’t increased in 18 months, leading to questions as to why that number hasn’t increased.

Goodale said the government has only laid two charges in the past two years.