Parasite from raw fish may be killing veterans who served in Vietnam, VA says

A recent Veterans Affairs (VA) study shows that slow-killing parasites may be causing the deaths of hundreds of Vietnam veterans, the Associated Press reported.

The VA study revealed that there may be a link between a rare bile duct cancer known as cholangiocarcinoma and liver flukes, parasites that infect a human when raw or undercooked fish is eaten. Symptoms may take years to show up, but are extremely painful when they do. 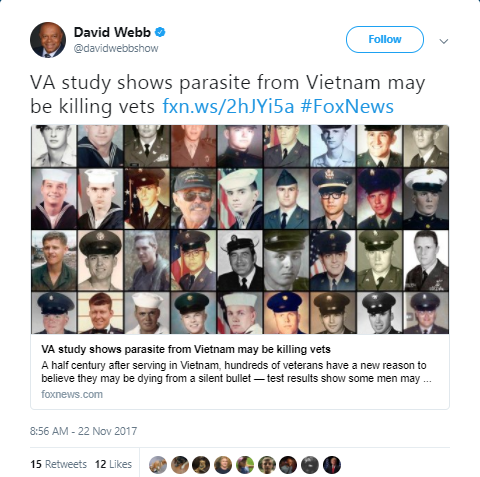 According to the study, 20 percent of the 50 blood samples provided were positive or bordering positive for liver fluke antibodies, tropical medicine specialist Sung-Tae Hong said, the Associated Press reported.

According to reporting, the VA has seen about 700 veterans with cholangiocarcinoma in the past 15 years, but less than half have filed health benefits claims because they were not aware of a connection to the parasites stemming from being in Vietnam.

“The VA rejected 80 percent of the requests, but decisions often appeared to be haphazard or contradictory, depending on what desks they landed on,” the Associated Press reported.

Sixty claims were submitted in 2017, of which three quarters of those cases were denied, despite the government issuing a warning on its website saying that some veterans could be at risk.

Mike Baughman, 65, who already has cholangiocarcinoma most likely caused by liver flukes, had his claim granted earlier this year after having been denied three times.

“Personally, I got what I needed, but if you look at the bigger picture with all these other veterans, they don’t know what necessarily to do,” he told the Associated Press. “None of them have even heard of it before. A lot of them give me that blank stare like, ‘You’ve got what?'”

“We are taking this seriously,” Curt Cashour, a spokesman with the Department of Veterans Affairs, told the Associated Press. “But until further research, a recommendation cannot be made either way.”