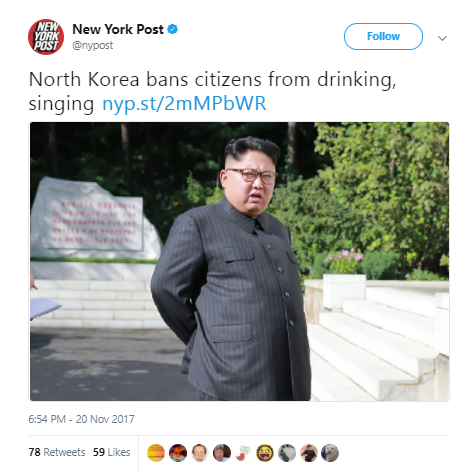 “(Pyongyang) has devised a system whereby party organs report people’s economic hardships on a daily basis, and it has banned any gatherings related to drinking, singing and other entertainment, and is strengthening control of outside information,” the National Intelligence Service (NIS) said.

The ban is an effort on “forestalling a possible negative impact of the tightening international sanctions on public sentiment,” according to the report.

North Korea has been facing increased United Nations sanctions after testing a number of missiles and developing their nuclear program.

The NIS said that it has been keeping its eyes on North Korea for the possibility of another missile test. However, there are no signs of an imminent threat.

“But we forecast that depending upon North Korean leader Kim’s [Kim Jong Un’s] determination, a nuclear test is possible any time,” the agency said.

On Monday, President Donald Trump announced that the United States is declaring North Korea a state sponsor of terrorism for the first time since 2008, after they were taken off the U.S. list of state sponsors of terror.