The Navy football team will be wearing Blue Angels-inspired uniforms for the 2017 Army-Navy game on Dec. 9 in Philadelphia. 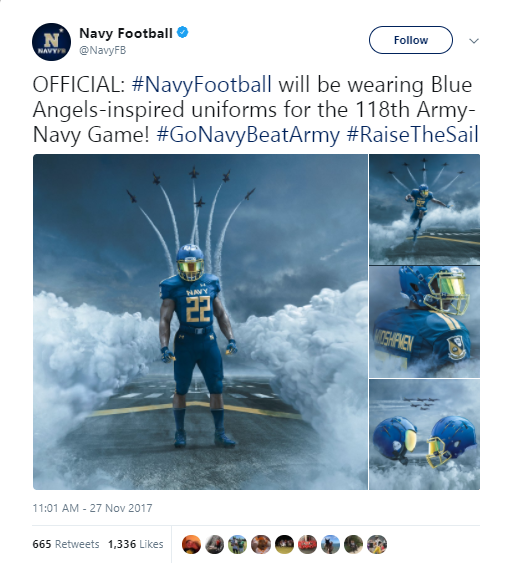 “Although the uniform departs from our customary characteristics, this tribute to the Blue Angels reflects the enthusiastic pride and appreciation we have for the Navy’s premier flying team and the motivation they convey to Navy football and the fleet at large,” Naval Academy Director of Athletics Chet Gladchuk said in a Navy release. “The masterminds at Under Armour are always thinking of ways to inspire our troops while still reflecting a deep appreciation for a Naval history that is so ingrained in our game day traditions. Annually, a special Navy uniform has become a statement in this game and brings with it appreciated meaning and a clear message that we are all in.” 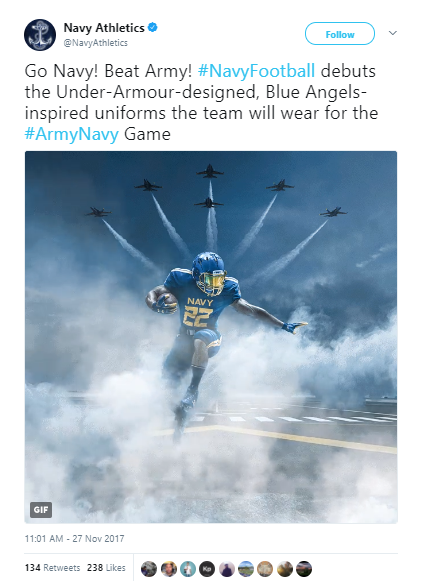 “Our partnership with the United States Naval Academy has afforded us the opportunity to tell some incredible stories through our specialty uniform designs and we hope, in some way, that the special moments we create on behalf of the Academy manifest the gratitude we feel. From the ‘Summer White’ design to the ‘Don’t Tread on Me’ uniforms, each opportunity leads down a path of research and information that drives us towards another special moment or achievement to celebrate,” said Adam Clement, Under Armour’s Senior Creative Director of Team Sports. “This year we partnered with the Naval Academy to use the Army-Navy Game to honor the incredible pilots that make up the Blue Angels. Anyone who has had the privilege of watching the Blue Angels perform knows there is no show quite like it. It inspires and excites all who stand witness, and we couldn’t think of a better way to pay homage to their great feats than creating a uniform that pays tribute to them.” 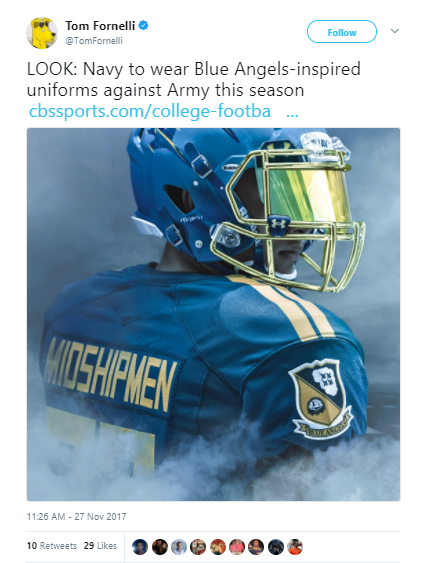 Under Armour became the school’s official uniform supplier four years ago and every year, Under Armour has made a specialized uniform for the Navy game against Army.

According to the release, additional designs in the uniform include: