A witness has said that the two Navy SEALs who are suspected in the death of Army Green Beret Staff Sgt. Logan Melgar reportedly wanted to “get back at” Melgar after he uncovered their cash skimming heist, and that they also used duct tape on Melgar, according to a new report.

NBC News obtained documents from the U.S. Army investigation surrounding the strangulation and killing of Melgar in June while in Mali, Africa, on a secret assignment. In the documents, a witness says one Navy SEAL said he “choked out” Melgar, and that he another Navy SEAL were out “to get back” at Melgar, NBC exclusively reported. 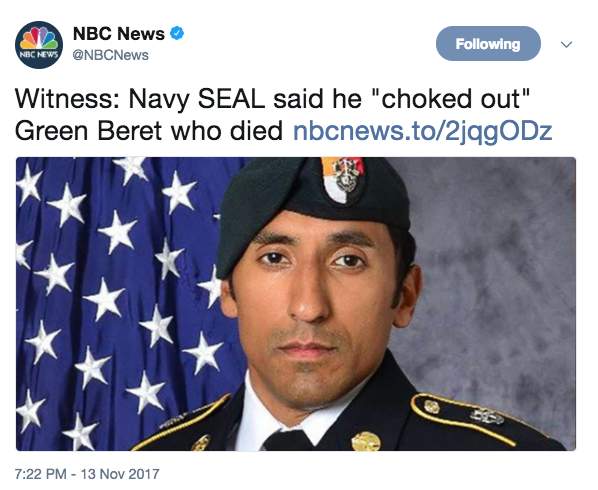 Another witness said the Navy SEALs “were among several individuals who were upset with Melgar ‘after they felt he intentionally tried to evade them while he was driving to a party,'” NBC reported, and that the group “made ‘numerous comments” on how ‘to get back’ at Melgar, according to the witness quoted in the document.”

The SEALs had “left that out of their interviews about the death because they were afraid it would be considered hazing,” NBC added.

It had recently been learned that the two Navy SEALs from SEAL Team 6 who are suspected of strangling and killing Melgar might have done so after he found out they were skimming money from an informant fund, and Melgar then refused to take part in the scam, another exclusive report found. 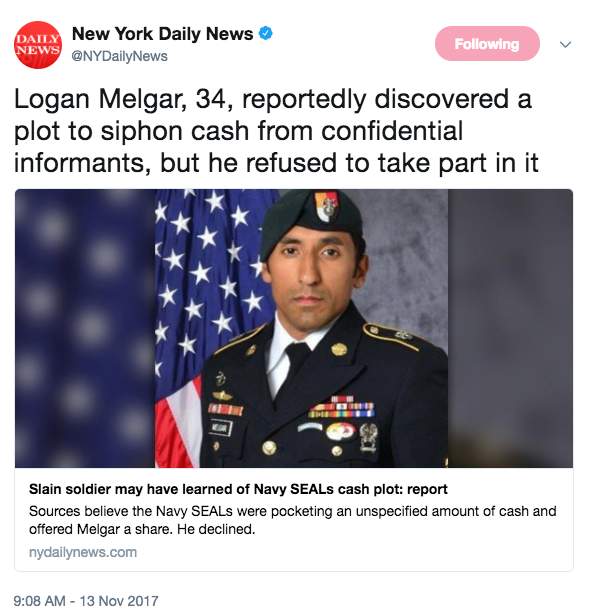 Melgar was found dead on June 4 in embassy housing in Bamako that he shared with other Special Operations forces assigned in the same area, including two members from SEAL Team 6. Melgar, who was 34 years old, had served two tours in Afghanistan. He joined the Army in 2012 and was assigned to the 3rd Special Forces Group out of Fort Bragg, North Carolina.

While the two SEALs reportedly had said they found Melgar “unresponsive” in their room, they changed their stories after an autopsy came back showing strangulation. One of the SEAls later said the three were wrestling.

“Once the SEALs got off of Melgar, according to the account they gave investigators, they realized he wasn’t breathing and attempted CPR and tried to open up an air path in his throat,” NBC reported.

The incident is highly suspicious, and no one has been charged yet in the soldier’s death, which was ruled to be “homicide by asphyxiation,” or strangulation. Two Navy SEALs were flown out of Mali and placed on administrative leave following the incident.

No charges have been filed yet in the case. The investigation has been turned over to NCIS, the Naval Criminal Investigative Service.

Melgar had reportedly told his wife he had a “bad feeling” about two of his partners who were from SEAL Team 6, The Daily Beast exclusively reported; Melgar told his wife he’d fill her in on the “full story” when he returned home – but Melgar did not make it home. The Daily Beast cited “an official speaking on condition of anonymity because the investigation is still ongoing.”

The New York Times first reported that Navy criminal authorities are looking into whether or not two members of SEAL Team 6 strangled and killed Melgar in Africa, according to the Times’ sources, which it cited as military officials.

It was later learned that Melgar might have learned the two Navy SEALs had been taking informant money, according to The Daily Beast.

“Melgar, two special operations sources say, discovered the SEALs were pocketing some of the money from the informant fund. The SEALS offered to cut him in, but Melgar declined, these sources said,” The Daily Beast reported.

It is unknown what specifically started the June 4 altercation at 5 a.m. but it escalated. Melgar lost consciousness—and, worse, stopped breathing. The SEALs attempted to open an airway in Melgar’s throat, officials said. It is unknown whether Melgar died immediately. The SEALs and another Green Beret, according to former AFRICOM officials, drove to a nearby French clinic seeking help. Melgar was dead when he arrived at the clinic, the official said. Asphyxiation was the cause of death.