The Las Vegas shooter who killed 58 people at a concert near the Mandalay Bay Resort and Casino in October once owned a unit in a high-rise condominium building in Reno, Nevada, that was the site of a shooting and hostage situation on Tuesday around 7 p.m., NBC News reported. 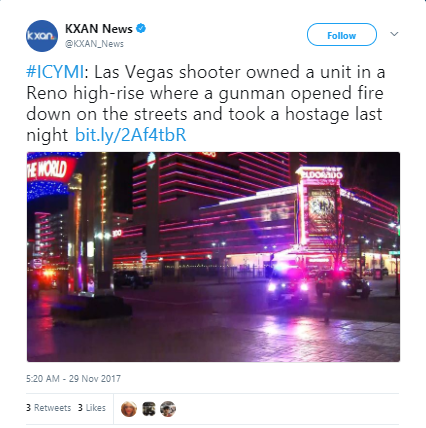 A man with a female hostage at the Montage condominium building opened fire for 30 minutes from the eighth floor before being taken out by a SWAT team after being barricaded in.

According to a Sparks Police Department news release, no one was injured except for a woman who received a superficial wound to her hand.

Police said an “officer-involved shooting occurred,” and the shooter received medical aid and was transported to the hospital, where he was pronounced dead.

Records showed that the Las Vegas shooter, Stephen Paddock, had owned a unit at the Montage but sold it in Dec. 2016.

In October, Paddock fired at a crowd of thousands of people from the 32nd floor of the Mandalay Bay Resort and Casino in Las Vegas, killing 58 people and injuring nearly 500 more before killing himself.

“When you heard it’s coming from above it reminds you of the guy shooting from Mandalay Bay,” said Mike Pavicich, a witness on Tuesday who was standing atop the parking garage at the nearby Eldorado Resort Casino in Reno.

The shooter on Tuesday fired bursts of five to eight shots at a time and had between 20 and 50 rounds of ammunition, the Reno Gazette-Journal reported.

The condominiums are located near some of Reno’s most popular casinos.