The tug boat “lost propulsion and drifted into the ship,” according to the statement.

The USS Benfold, a guided-missile destroyer, “sustained minimal damage, including scrapes on its side.” No one was injured in the collision, and the incident is under investigation. 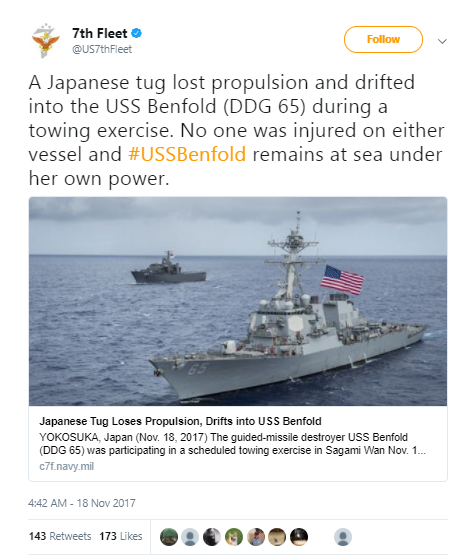 “Benfold remains at sea under her own power,” the statement read. “The Japanese commercial tug is being towed by another vessel to a port in Yokosuka.”

While only sustaining minor damage, the incident marks the fifth time this year that a ship from the 7th fleet has been involved in a crash. Two of the incidents involved deadly crashes, which resulted in the deaths of 17 sailors.

In June, seven sailors were killed when the USS Fitzgerald collided with a container ship off the coast of Yokosuka, Japan.

On Aug. 21, 10 sailors were killed when the USS John S. McCain collided with an oil tanker near Singapore.

Following the collision of the USS John S. McCain, the U.S. Navy announced a fleet-wide review of its ability to operate.

Earlier this month, the Navy released an official report on the investigation, making the determination that the two fatal collisions were “preventable” and were a result of “multiple failures by watch standers.”

“We are a Navy that learns from mistakes and the Navy is firmly committed to doing everything possible to prevent an accident like this from happening again,” Chief of Naval Operations (CNO) Adm. John Richardson said in a press release. “We must never allow an accident like this to take the lives of such magnificent young Sailors and inflict such painful grief on their families and the nation.”

In September, the U.S. Navy relieved Rear Adm. Charles Williams, commander of Combined Task Force 70, and Capt. Jeffery Bennett, commodore of Destroyer Squadron 15, due to “a loss of confidence in their ability to command,” the Navy said.