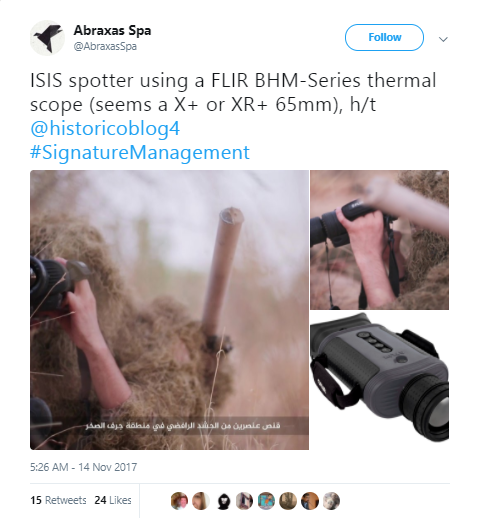 The video, titled “Snipers of the South – Wilāyat al-Janūb,” shows footage of ISIS snipers, including a scene where an ISIS fighter is firing a U.S. M4 while a spotter is carrying a FLIR BHM thermal camera, Military Times reported.

The BHM series was designed for maritime applications to help see “other boats, obstructions, land, buoys and floating debris in total darkness, as well as through haze, smoke and light fog.,” according to the FLIR website.

FLIR claims “BHM-Series thermal imagers are the best search and rescue tools on the water, giving you the power to search for disabled vessels and people in the water regardless of lighting conditions.”

The FLIR BHM thermal camera retails for roughly $5,000 and are restricted export items to the U.S. only, under International Traffic in Arms Regulations unless provided a license from the U.S. Department of State’s Directorate of Defense Trade Controls, Military Times reported.

It is unclear how ISIS fighters acquired the gear, but it should be noted that ISIS has raided bases and armories in Iraq and Syria to acquire gear armaments.

According to Military Times, “M4s, EOTech holographic sights and advanced combat optical gunsights” have been operated by ISIS fighters by becoming accessible to them after the U.S. military provided them to coalition partner forces fighting ISIS.