Pope Francis delivers his message for the State Visit and Apostolic Journey to the Republic of the Philippines on Jan. 16, 2015. (Malacañang Photo Bureau/Released)
November 21, 2017 Peter Reid
Share
Tweet
Flip

Wafa Media Foundation circulated the image of the photo just days after after the terror group threatened to attack the Vatican around Christmas. 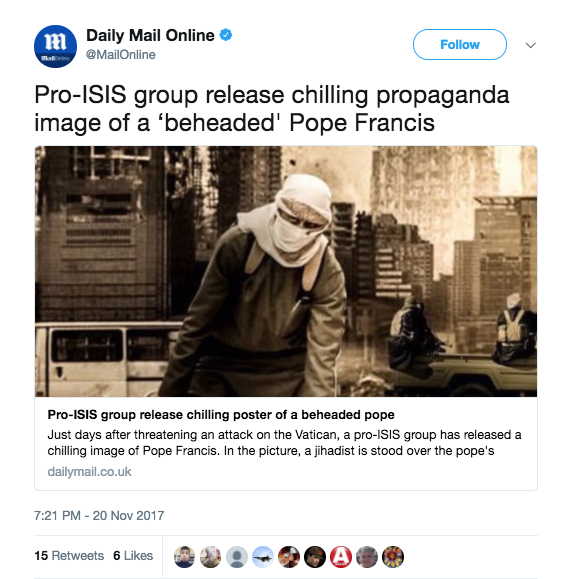 A caption on the image reads “Jorge Mario Bergoglio,” which is Pope Francis’ name.

“O Worshipers of the Cross, I swear to avenge every single drop of blood that you spilled and every house that you have destroyed,” the photo’s caption reads. “I swear that you will taste the bitterness of the cups of death and make your feasts massacres. You will not even enjoy living in your homes, Allah willing.”

According to the terror watch group MEMRI, the image was first posted last week on the anonymous messaging app Telegram.

The image can be seen here.

“It’s not surprising to see threats like this against Pope Francis and Christianity, especially during the holiday season. ISIS and its supporters know how to play the media game, and often time the releases of their threats [is] to get the highest amount of attention as possible,” Rita Katz, Director of the SITE Intelligence Group, told Newsweek.

“Though the group always issues threats to Christians, a group like Wafa may naturally want to ramp up such messages leading into Christians’ biggest holiday,” Katz added.

Pro-ISIS propaganda posters and media are typically used to promote lone-wolf terrorist attacks in Western countries as terrorists continue to lose ground in the Middle East.

In December 2015, Rizwan Farook and Tashfeen Malik killed 14 people and seriously injured 22 others during a mass shooting and attempted bombing in San Bernadino, California.