After Hussein fell from power, Al-Saffar began receiving death threats and eventually fled to the U.S. Now living in El Cajon, he’s still waiting to find out if he will be granted asylum.

“When I come here, I feel the freedom, the nice weather, the nice people,” Al-Saffar said. “Now I’m inspired to work again.”

When he talks about pieces he created for Hussein, Al-Saffar clarifies that he didn’t take the commissions by choice. 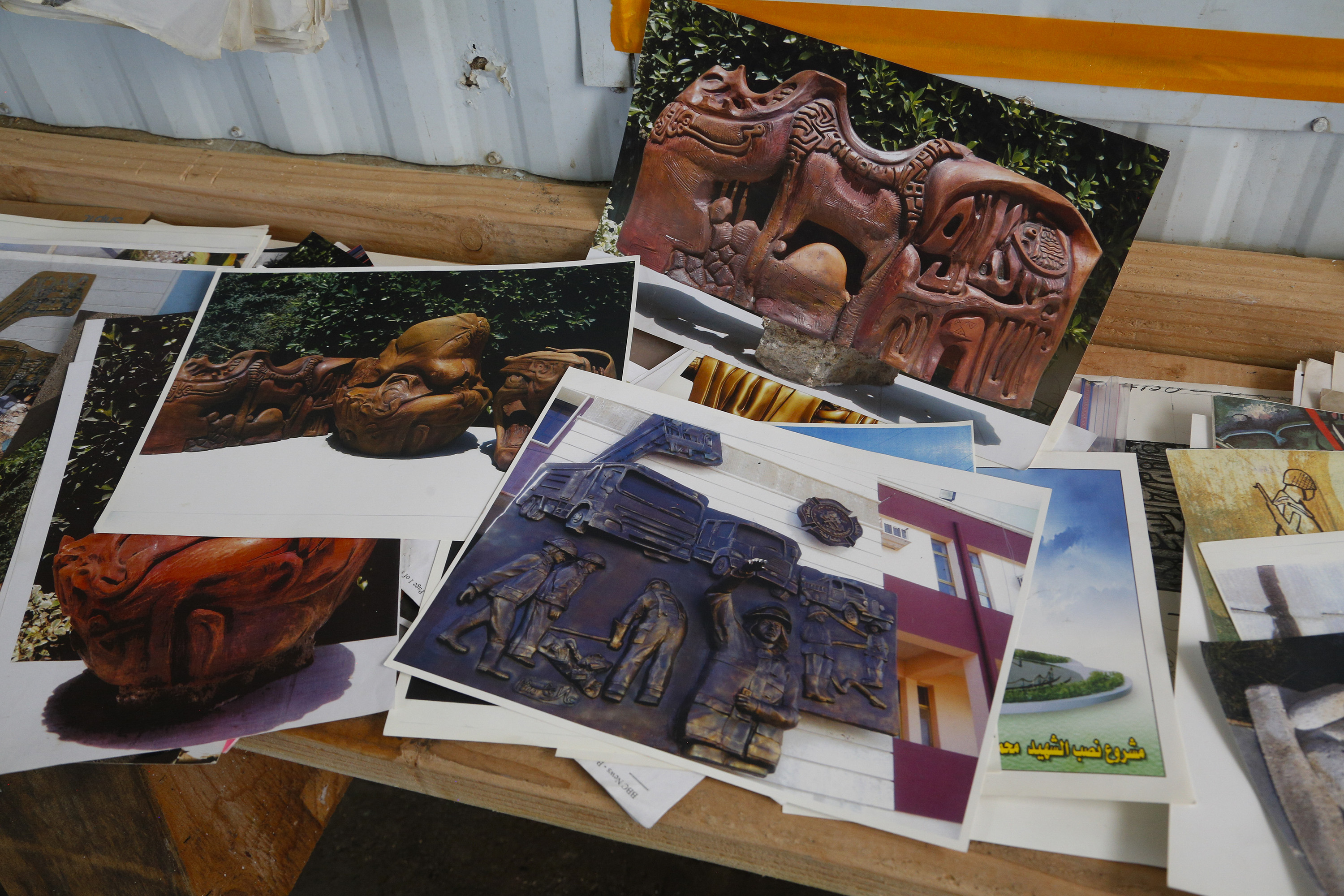 Iraqi artist Alaa Al Saffar looks over photographs of some of the art works he has on display in Baghdad, Iraq. (Nelvin C. Cepeda/San Diego Union-Tribune/TNS)

“He wanted (it), not me,” he says, showing a proposal for a statue in the middle of Baghdad that featured an 11-meter version of Hussein.

Under the regime, artists who showed skill were forced to work for Hussein or go into hiding, Al-Saffar said.

“The arts have to be for revolution, not the dictators,” Al-Saffar said. “But we can’t. If you do that, they will kill you.”

Al-Saffar remembers being taken on a bus with windows tinted so dark that he couldn’t see where he was going. He would meet with Hussein and create statues for him. He usually didn’t know what his work would be used for, he said.

When he received instructions to sculpt white birds, he didn’t know they were for the then-dictator’s birthday party until he saw them on state-run TV.

Al-Saffar got a master’s degree in art in Geneva in 1975 and returned to Iraq in 1980. When war broke out, he was unable to leave again.

After the end of Hussein’s reign, Al-Saffar had more freedom to make what he wanted, but for several years, he couldn’t find anyone to buy his work.

“What I do? I don’t know any business, only just this,” Al-Saffar said.

Then the government chose him to create a memorial for a 2005 stampede on a bridge in which an estimated 1,000 people died. The stampede was caused by a rumor that a suicide bomber was on the bridge.

Al-Saffar never got to make the full-size sculpture because the government didn’t have enough money. After a news article about the project identified him as a former artist for Hussein, Al-Saffar began said he began receiving death threats.

He was also targeted by al-Qaida, he said, because the group didn’t allow art. The militia told him to destroy his work, he said, so he did.

After his adult daughter and her husband came to the U.S. on visas given to Iraqis who helped the U.S. military, Al-Saffar and his wife got temporary visas to come visit.

Once they arrived safely in the U.S. a few days before Thanksgiving in 2014, they applied for asylum. Since they already had temporary visas, their cases are in the affirmative asylum process.

Affirmative asylum generally takes longer than defensive asylum, which is for those who are in the U.S. without authorization or who ask for asylum on arrival at the border.

During the asylum application process, a U.S. immigration official asked Al-Saffar how he feels in Iraq.

The wait has been difficult, he said. He has several self-portraits that express his anxiety.

In one, the artist plucks petals from a flower, like a lover who wants to know if his love is requited. In another, he holds a musical instrument as though to play it, but his hands are missing.

Still, his art has a freedom here that it couldn’t back home.

He creates art from stories that he imagines. Some of his paintings feature curvaceous, naked women. Those, he said, would never have been allowed in Iraq.

In El Cajon, the side of a business on Main Street features a piece he calls “Half Freedom.” It replicates part of the Freedom Monument in Baghdad.

Al-Saffar wants to find someone to fund another piece in San Diego to symbolize the freedom that he and other Iraqis have found in the U.S. He has a model of it in his studio, a cylinder with “Freedom” written on the side in many of the languages spoken in Iraq, including in English underneath the American flag.

The cylinder tilts slightly to represent people who want freedom but haven’t been able to come to the U.S., he said.