French President Emmanuel Macron announced Monday that France will ban gender-based insults, and those people who violate the measures will face fines.

In a speech marking the International Day for Elimination of Violence Against Women, Macron said France won’t be “one of those countries where women live in fear” of “verbal violence against women.”

“Let’s seal a pact of equality between men and women,” Macron said. “It is essential that shame changes camp. Gender-based insults will be punishable by law. Offenders will face a deterrent fine.” 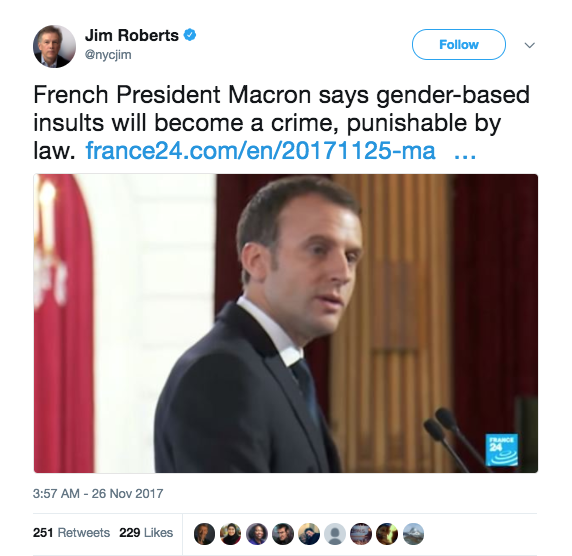 During Macron’s speech, he observed a minute of silence for the 123 women killed by their partners or ex-partners in 2016.

“The streets should not become hell for the women of France,” Macron said.

“This is unacceptable,” he said. “Women must feel comfortable in public spaces. Women in the republic must not be afraid to use public spaces. This must be one of the priorities of the police.”

Macron said that France’s Ministry of the Interior will be holding meetings that will create new rules in an attempt to prevent verbal violence against women.

Macron also said he would create “on-demand” bus stops where women could stop a bus anywhere they want so they can get home safely.

The announcement comes amid multiple sexual harassment allegations in the political and entertainment sectors.