Former President Bill Clinton is facing four new sexual assault allegations, this at a time when other prominent figures and people in positions of power are being exposed, as well.

Democratic Party sources and an official who served the Clinton and Barack Obama administrations have come forward and told author Ed Klein about the allegations, and that the attorneys who represent the four women have notified Clinton that they are preparing four separate lawsuits.

The women, who have not been identified, are asking for payouts in order to keep quiet, The Daily Mail reported.

The alleged sexual assault incidents took place after Clinton was President, after 2001 in the early 2000s, and during the time Clinton was hired by billionaire investor Ron Burkle.

Clinton reportedly helped Burkle with his business and flew around the world on “Air F**k One,” Berkle’s private jet, the Daily Mail said. The four women accusing Clinton of sexual assault worked low-level positions for Burkle, and that they were in their “late teens” at the time of the alleged assaults, the Daily Mail reported.

“If they fail [to reach an agreement], according to sources in Clinton’s inner circle, the four women are said to be ready to air their accusations of sexual assault at a press conference, making Clinton the latest — and most famous — figure in a long list of men from Harvey Weinstein to Kevin Spacey who have recently been accused of sexual assault,” the Daily Mail reported.

He used the hashtag “Predator Bill.” Dotcom founded Megaupload, a file-hosting site that had 180 million users but was shut down by the FBI in January when Dotcom and three others were indicted on copyright infringement charges. 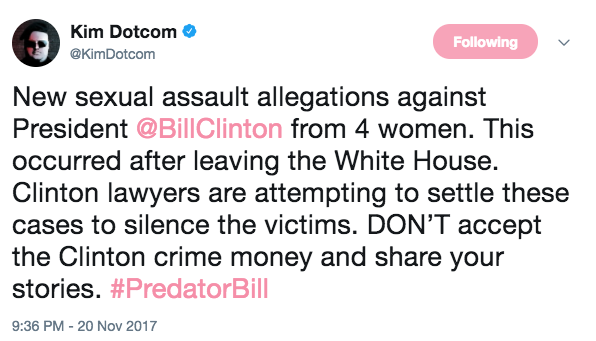 This is not the first time Clinton would face a lawsuit stemming from his promiscuous behavior.

Former Arkansas state employee Paula Jones was paid out $850,000 to settle her sexual harassment lawsuit against Clinton in the late 1990s – her case ultimately led to Clinton being impeached in the U.S. House of Representatives, although Clinton was acquitted by the Senate in 1999.

Clinton has been accused of rape by Juanita Broaddrick in 1978, groping without consent by Kathleen Willey in 1993, and exposing himself and sexual harassment by Jones in 1991. These allegations generally surfaced between 1998 and 1999.

And, it was brought to light during the Jones trial in 1998 case that Clinton committed perjury and lied under oath about his affair with Monica Lewinsky in the early 1990s, as evidence of their sexual relationship surfaced during that time – after Clinton had denied having a sexual relationship with the White House intern.

Jones’ lawsuit was dismissed for lacking legal merit, before Clinton’s impeachment and the Lewinsky affair were brought to light.

The Daily Mail reported that a rep from Clinton’s legal team recently said: “‘Obviously, I’m aware of [the allegations] but can’t talk about them.'”

“The new charges are likely to revive the debate over why Democrats defended Clinton during the Monica Lewinsky scandal and why liberals and feminists ignored credible charges of sexual assault against the 42nd president, not only from Paula Jones, but also from Juanita Broaddrick, Kathleen Willey, and others,” the Daily Mail reported.

‘Bill is distraught at the thought of having to testify and defend himself against sex charges again,’ said a Democratic Party official who is familiar with the case.

‘He hopes his legal team can somehow stop the women from filing charges and drag him through the mud.’

The source added that Hillary Clinton is furious with her husband for getting entangled in yet another sexual scandal.