Former classmates paint portrait of Texas church shooter’s ‘twisted’ past: ‘Over the years we all saw him change’

“I always thought if someone in our class would be able to do something like this it would be him.”

A disturbing portrait emerged of Devin Kelley, 26, a day after he massacred 26 people attending Sunday services at the First Baptist Church in tiny Sutherland Springs. 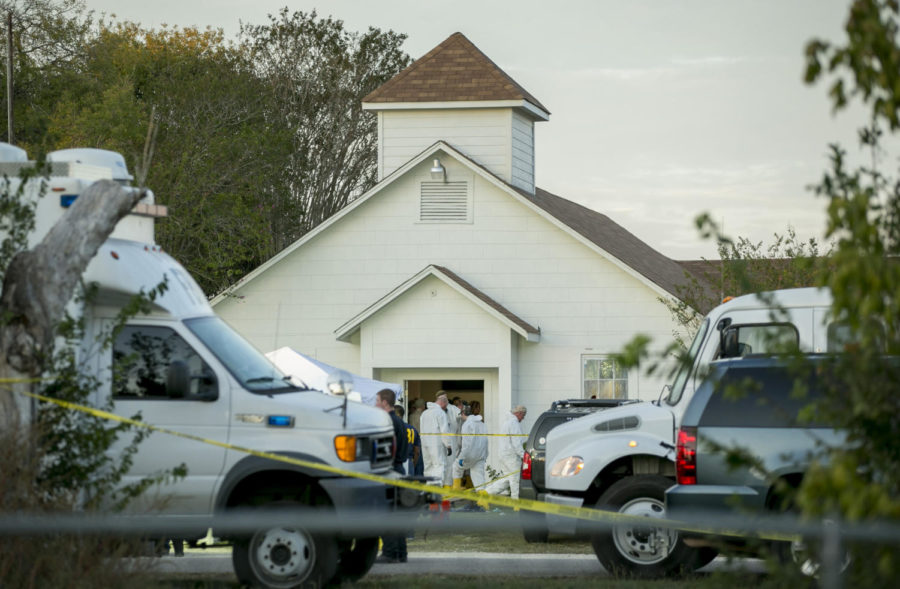 Investigators work at the scene of a mass shooting at the First Baptist Church in Sutherland Springs, Texas on Sunday, Nov. 5, 2017. (Jay Janner/Austin American-Statesman/TNS)

Authorities said Kelley’s rampage was fueled by a domestic dispute that centered on his mother-in-law who attended the church.

His former classmates said he underwent a transformation in his teens — from an easygoing, regular kid to a tortured soul.

“He wasn’t always a ‘psychopath,’” Courtney Kleiber wrote on Facebook.

“He used to be happy at one point, normal, your average kid. We had a lot of good times together. Over the years we all saw him change into something that he wasn’t.

“To be completely honest, I’m really not surprised this happened, and I don’t think anyone who knew him is very surprised either.”

“He was heavily involved in the church at one point and did believe in God earlier on in his life,” she wrote.

“I was his best friend for a number of years and he was a happy, caring person back then. It’s crazy what time and mental illness can do to you.”

Another former classmate, Emily Robb, wrote that she broke ties with Kelley after he started sending her “inappropriate messages” on Facebook.

“He was always kind of different and an outcast,” she wrote.

“Still in shocked about what happened … it is truly horrible. Obviously he was not mentally stable, and unfortunately others had to pay for it.”

Bailey Kai said she attended church with Kelley years ago. He struck her as a little off.

“We would attend youth services together. We would hang out, at church, in school, talk on MySpace. Teenager things,” she wrote.

“I’m not going to lie, he was strange. It didn’t really bother me, but maybe that’s why I never cared to get too too close.”

Kai wrote that she was at a different church, not far from First Baptist, when Kelley went on his rampage.

“I can’t remember the last time I felt so nauseous,” she wrote. “I don’t know what to say. I can’t stop shaking and I don’t want to leave my house ever again.”