A North Korean soldier was caught on video earlier this month making a daring escape across the border between North and South Korea while other soldiers fired at him.

On Nov. 13, the soldier, surnamed Oh, sped toward a bridge in a jeep, driving past checkpoints while North Korean soldiers pursued him on foot, according to video released by the United Nations Command on Wednesday. 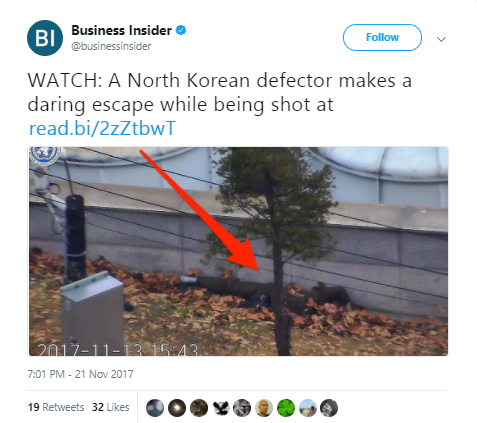 The soldier, attempting to cross the Military Demarcation Line to reach South Korea, jumped out of his vehicle and crossed the line. At the same time, North Korean soldiers from an adjacent guard tower pursued him. Multiple soldiers can be seen firing their weapon.

Last week, South Korea’s military said that Oh was shot at more than 40 times and was struck roughly five times.

South Korean soldiers crawled to the injured defector who was lying down near a pile of leaves against a small wall. The South Korean soldiers dragged him to safety as North Korean troops gathered on their side of the line. The soldier was then airlifted to Ajou University Medical Center.

U.S. Army Col. Chad G. Carroll, a spokesman for the U.N. Command, said North Korean soldiers violated the Korean War armistice during their pursuit of the defector. He said they violated it by firing their weapons across the Military Demarcation Line and temporarily crossing the line.

Carroll said that the UN Command made North Korea aware of the violation and requested a meeting to discuss the investigation to prevent future incidents.

After undergoing multiple surgeries, the defector is now in stable condition and has regained consciousness. He also requested listening to Western music and watching television.

Surgeons removed dozens of parasites from Oh’s ruptured small intestine, one of which was more than 10 inches long. The parasites reveal the nature of health conditions in North Korea.