Eleven Navy personnel were on board, and eight have been recovered and are in good condition after being transferred to the USS Ronald Reagan aircraft carrier, the Navy said. 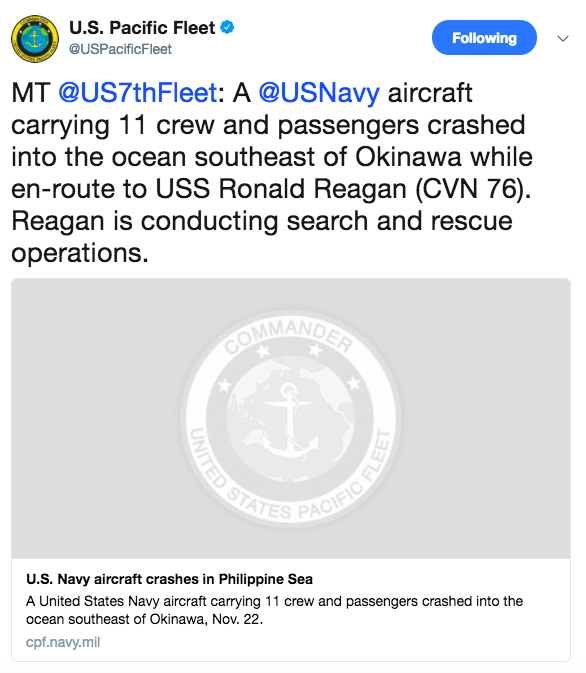 “Our sailors are in my thoughts and prayers as we perform search and rescue operations for a downed aircraft in the Philippine Sea. Eight of the 11 Sailors are safe and sound on USS Ronald Reagan. We continue to search for three,” said Chief of Naval Operations Adm. John Richardson. 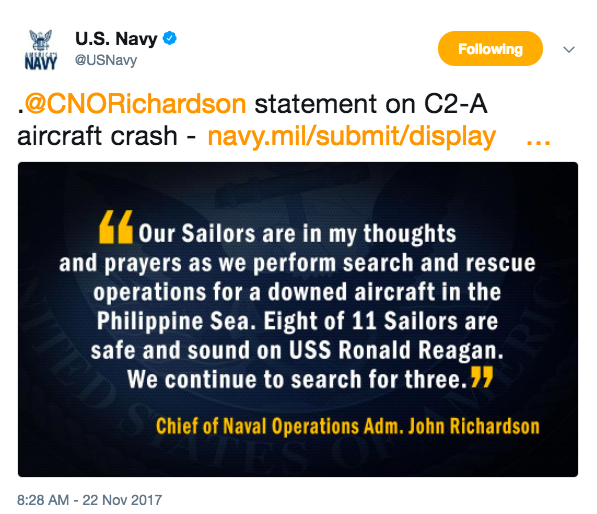 The aircraft reportedly crashed shortly after takeoff, and defense officials told Fox News that “early indications pointed to an engine failure as the cause of the mishap.”

Search and rescue efforts are underway for the the three missing personnel – the U.S. Navy and Japan Maritime Self-Defense Force (JMSDF) ships and aircraft are on-scene. The names of the crew and passengers are being withheld pending next of kin notification, the Navy said.

An investigation of the crash is also underway.

The C2 had taken off from Japan and was headed to the USS Ronald Reagan.

The Navy reported the following details:

At approximately 2:45 p.m. Japan Standard Time, Nov. 22, the C2-A aircraft with 11 crew and passengers onboard crashed into the ocean approximately 500 nautical miles southeast of Okinawa. The aircraft was conducting a routine transport flight carrying passengers and cargo from Marine Corps Air Station Iwakuni to USS Ronald Reagan (CVN 76). Reagan is operating in the Philippine Sea as part of an exercise with JMSDF.