The aircraft crashed around 4 p.m. local time, killing one pilot while another was transferred to Val Verde Regional Medical Center.

The identities of the pilots are being withheld until their families are notified.

“Our biggest priority at this time is caring for the family and friends of our Airmen,” Col. Michelle Pryor, 47th Flying Training Wing Vice Commander, said in a statement. “We are a close-knit family, and when a tragedy like this occurs, every member of the U.S. Armed Forces feels it. Our people take top priority, and we are committed to ensuring their safety and security.”

The aircraft crashed roughly 14 miles northwest of Laughlin Air Force Base near Spur 454 and U.S. Route 90 in Del Rio, Texas, the release said.

The accident is under investigation.

The Air Force confirmed the death of one of the Airmen.

“It is with great sadness we announce the passing of one of our own and the injury of another Airman during a plane crash near Del Rio, Texas,” the U.S. Air Force said in a statement on Twitter. “Our thoughts and deepest condolences go out to the families, friends and Airmen affected by this tragedy.” 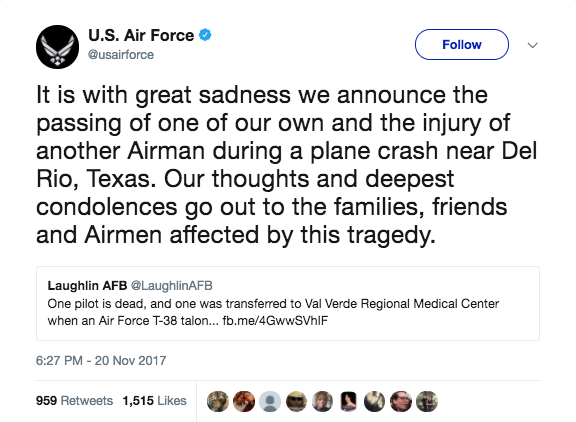 The T-38 Talon is “a twin-engine, high-altitude, supersonic jet trainer used in a variety of roles because of its design, economy of operations, ease of maintenance, high performance and exceptional safety record,” according to the Air Force’s website. “Air Education and Training Command is the primary user of the T-38 for joint specialized undergraduate pilot training.

“Air Education and Training Command uses the T-38C to prepare pilots for front-line fighter and bomber aircraft such as the F-15E Strike Eagle, F-15C Eagle, F-16 Fighting Falcon, B-1B Lancer, A-10 Thunderbolt and F-22 Raptor,” according to the website.