A Vietnam veteran died when a nurse’s aide at a VA hospital in Massachusetts didn’t check up on him and instead played video games on her computer, the Boston Globe recently reported. 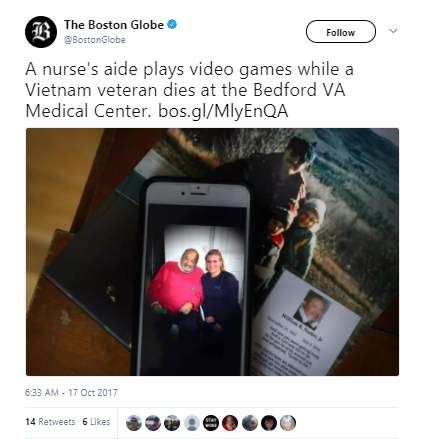 Vietnam veteran and retired police detective Bill Nutter was being cared for at the Bedford VA Medical Center after having recently lost his second leg due to diabetes. He suffered from arrhythmia, which could cause cardiac arrest at any given moment.

Nutter’s daughter, Brigitte Darton, went on a family vacation in July 2016, but the following day she received a phone call from her mother saying that her father had died.

A doctor at the VA Medical Center told the family that a staff member did not check on him hourly like they were supposed to.

The nurse’s aide responsible for checking on Nutter, Patricia Waible, admitted that she was playing video games as opposed to watching the veteran after initially saying she checked up on him once or twice an hour. Hospital cameras showed that she never left her computer to check up on him.

Another nurse who reportedly made a slit throat gesture the following morning announcing Nutter’s death was terminated.

The VA inspector general has launched a criminal investigation into systemic failings at the medical center; some of these failings led to Nutter’s death.

Waible was transferred to the cafeteria after Nutter died last year. The VA is seeking her permanent removal. 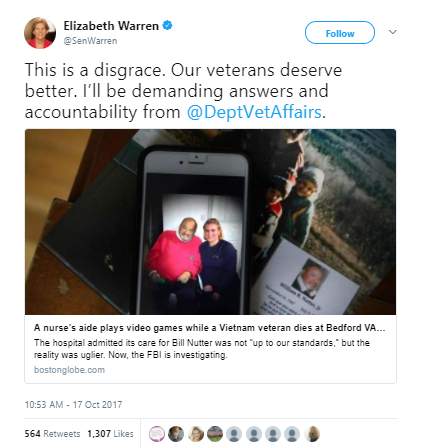 “I hold the VA responsible for all of this. They’re responsible for their employees,” Darton told the Boston Globe. “How many other people did this lady cause issues with?”

“My dad might not have lived another five months, who knows? But if we could have had another month with him — this lady took that away,” Darton said.

Nutter’s family has consulted a lawyer and they are considering legal action against the VA.

A report said that Nutter’s wife, Carol Nutter, was informed that she could file a tort claim – which is a claim against the National Archives or its employees for damage to or loss of property or personal injury or death. But Carol Nutter said she was never given that information.

Carol Nutter said she originally received a phone call from the hospital saying that her husband died and doctors couldn’t do anything about it.

Several days later, she received another phone call saying that her husband died because they didn’t check up on him once or twice per hour the night of his death.

While serving in Vietnam as a door gunner, Bill Nutter was exposed to Agent Orange, a toxic herbicide that started deteriorating his health two decades after returning home from Vietnam.

While the the Bedford VA Medical Center is ranked highly by the VA, several employees at the hospital have come forward saying that there are serious safety issues.

Employees at the hospital told the Boston Globe that some veterans go without food for hours, and that veterans are left in soiled bed linens and clothes.

And an electrician told the Boston Globe that the building contains asbestos, a cancer-causing material.