Police and protesters swarmed the University of Florida on Thursday as the campus braced for a speech by white nationalist Richard Spencer, whose planned appearance led Florida’s governor to declare a state of emergency for the area.

Uri from Gainesville holds several signs in protest prior to a scheduled speech by white nationalist Richard Spencer at the University of Florida Thursday, Oct. 19, 2017 in Gainesville, Fla. (Ricardo Ramirez-Buxeda/Orlando Sentinel/TNS)

Spencer, whose last major public appearance with other white nationalists ended with a riot in Charlottesville, Va., this year, was expected to speak in the afternoon at the Phillips Center for the Performing Arts on an isolated corner of the campus.

Weapons have been banned from the event, along with a wide range of other items, including water bottles, masks, shields and hats. 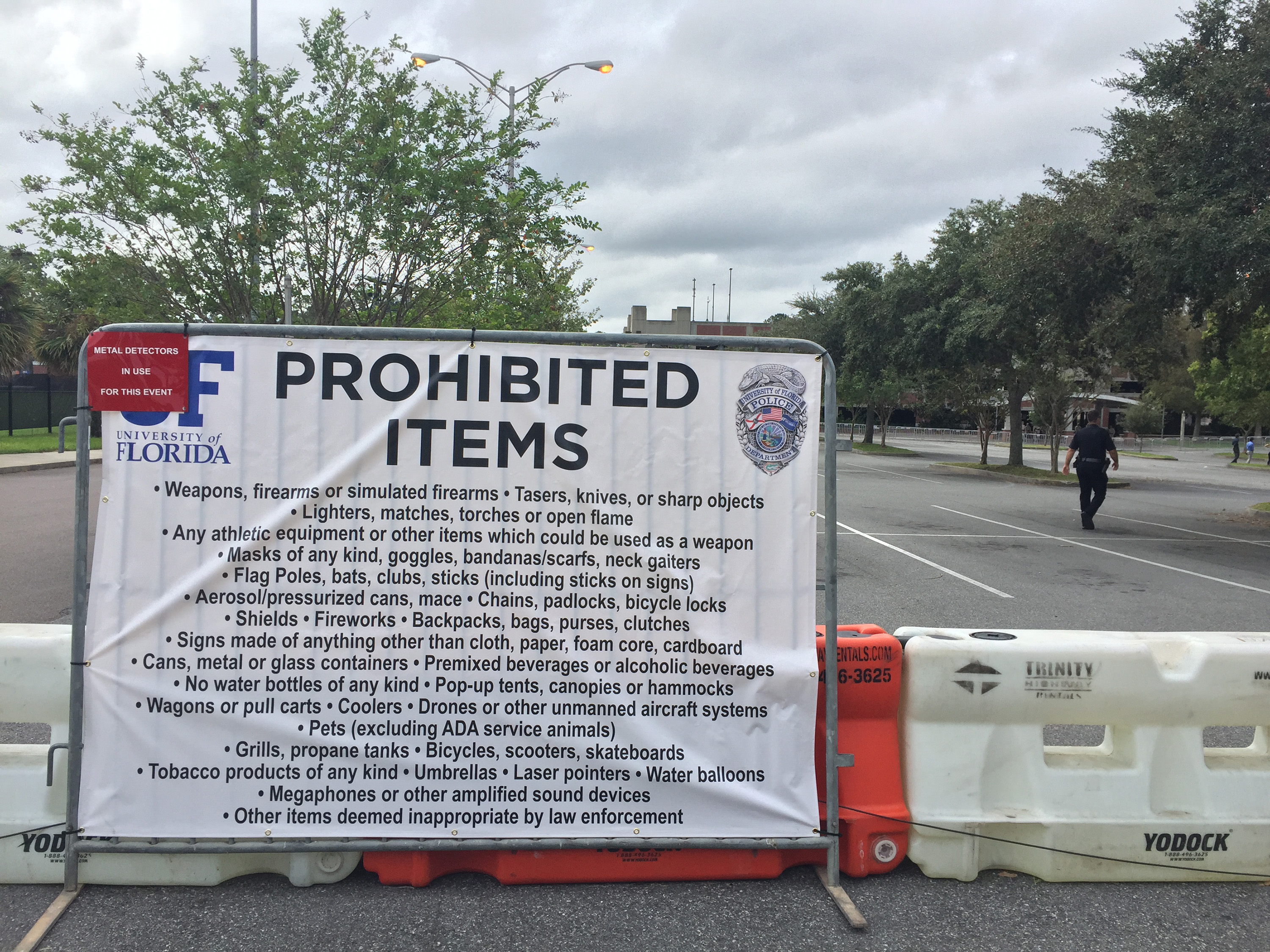 A list of prohibited items list is posted on campus prior to the scheduled speech by white nationalist Richard Spencer at the University of Florida Thursday, Oct. 19, 2017 in Gainesville, Fla. (Ricardo Ramirez-Buxeda/Orlando Sentinel/TNS)

Spencer gained national prominence in recent years for his support of President Donald Trump and for his views calling for a separate nation for white people. The apparent resurgence in white nationalism in the U.S. has sparked anti-supremacists to mobilize with their own efforts, which have included nonviolent demonstrations and pressure campaigns on companies providing services to white nationalists and sometimes violent attacks intended to drive white nationalists out of public spaces.

Spencer has turned his sights to public universities, where First Amendment protections of free speech limit officials’ ability to deny Spencer a platform. Officials at the Florida college have confirmed they’ve spent roughly $500,000 on security for the event, and police from around Florida have gathered in Gainesville to assist local police.

“Everyone is welcome at #SpenceratUF,” Spencer tweeted before the event Thursday. “This is going to be an important dialogue for the entire community.”

Florida Gov. Rick Scott declared a state of emergency for Alachua County on Monday, saying in his executive order a “threat of a potential emergency is imminent,” and that law enforcement must defend “public safety and security will be safeguarded and critical infrastructure, and public and private property will be protected.”

These measures, which came at the request of Alachua County Sheriff Sadie Darnell, are not in response to any specific threats, according to the sheriff’s and governor’s offices.

University officials announced that most classes would meet as normal Thursday.