An attack in Niger that left four American Green Berets and five Nigerien soldiers dead earlier this month has sparked a nationwide debate over how the Trump administration has handled the incident.

During a condolence call with Myeshia Johnson, the widow of one of the men who was killed, President Donald Trump reportedly told her that her husband “knew what he signed up for.” Democratic Rep. Frederica Wilson of Florida, a friend of Johnson’s family who listened to the call on speakerphone, called Trump’s remarks “insensitive.”

In response, White House Chief of Staff John Kelly called Wilson an “empty barrel,” and said he was appalled that the congresswoman shared what she heard on that call. Trump fired off several tweets calling Wilson “wacky” and disagreeing with the widow’s impression of the call.

As the feuding continued, Joint Chiefs Chairman Gen. Joseph Dunford held a press conferenceat the Pentagon on Monday addressing reports that the Trump administration was withholding information about what really happened in Niger.

Here’s what we know about how the attack unfolded, according to Dunford’s timeline: A US Army Special Forces weapons sergeant trains Nigerien soldiers in Diffa, Niger, in March 2017. The US has been slowly escalating its presence in both Niger and the rest of Africa — 6,000 US troops on the continent today. Zayid Ballesteros/US Army

Dunford said 12 members of the US Special Operations Task Force joined 30 Nigerien forces on a reconnaissance mission from Niamey, Niger’s capital city, to an area near the remote village of Tongo Tongo.

October 4: The day of the attack US soldiers and the Nigerien troops met with local leaders to try to gather intelligence information, Dunford said. Some of the soldiers stayed behind to guard their vehicles, a US defense official told CNN.

As the meeting came to a close, the soldiers became suspicious when the village leadership started stalling and delaying their departure.

When US troops started walking back to their vehicles mid-morning, they were attacked by approximately 50 militants. Dunford said the enemy was likely from an ISIS-affiliated group of local tribal fighters.

The militants fired on the US-Nigerien patrol team with small arms, machine guns, and rocket-propelled grenades. This apparently caught the Americans and Nigeriens by surprise.

An hour into the firefight, the American soldiers asked for support to thwart the attack.

Dunford said a drone arrived overhead “within minutes,” although it was only sent to gather intelligence. French Mirage fighter jets capable of striking enemy targets arrived at the scene “within an hour.”

Later that afternoon, French attack helicopters arrived along with a Nigerien quick reaction force as well.

Sgt. La David Johnson was somehow separated from the rest of his unit. US military officials were not able to explain how or when exactly that happened.

“This [attack] was sophisticated,” an intelligence official told ABC News. “Our guys not only got hit hard, but got hit in-depth.”

Responding to questions about why the US troops didn’t request reinforcements sooner, Dunford said he wouldn’t judge why it took them an hour to ask for backup.

“I’ve been in these situations myself where you’re confronted with enemy contact, [and] your initial assessment is you can deal with that contact with the resources that you have,” he said. “At some point in the firefight, they concluded they then needed support, and so they called for additional support.”

That night: US soldiers evacuated 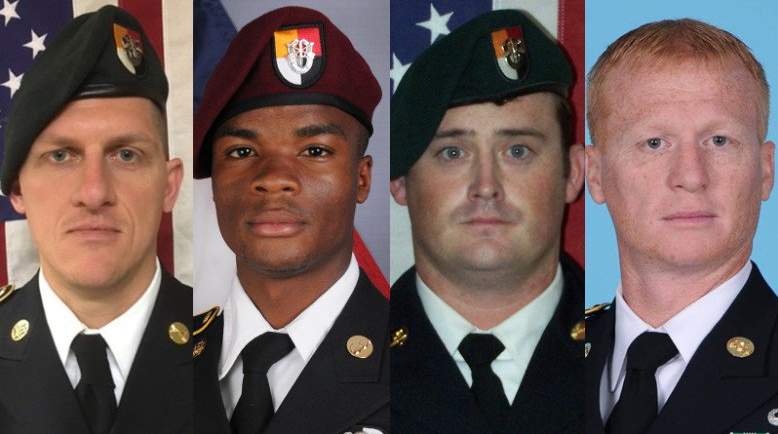 French military Super Puma helicopters evacuated US soldiers who were wounded during the firefight to Niamey.

Dunford said US officials continue to investigate how Johnson separated from the team and why it took 36 hours to recover his body.

Secretary of Defense James Mattis, meanwhile, has insisted that Johnson was not “left behind.”

“The US military does not leave our troops behind, and I would just ask you not question the actions of the troops who were caught in the firefight and question whether or not they did everything they could in order to bring everyone out at once,” he said.

An intelligence official told ABC News that Johnson’s locator beacon was giving unclear reports, and he seemed to be moving.

“Johnson’s equipment might have been taken,” the official said. “From what we now know, it didn’t seem like he was kidnapped and killed. He was somehow physically removed from where the combat took place.”

That same day, the Pentagon identified the three other soldiers who were killed.

October 7: Johnson’s body is returned to Dover Air Force Base in Maryland

During a press conference at the White House, CNN asked Trump why it took so long for him to come out with a statement about what happened in Niger.

Obama administration officials pushed back hard on that claim, calling it false.

That exchange was the first time Trump addressed the Niger ambush publicly.

The Gold Star widow broke her silence on Monday, saying that Trump had trouble remembering her husband’s name and told her that “he knew what he signed up for.” Johnson said she cried after she got off the phone.

After the interview aired, Trump tweeted, “I had a very respectful conversation with the widow of Sgt. La David Johnson, and spoke his name from beginning, without hesitation!”

“If my husband is out here fighting for our country, and he risked his life for our country, why can’t you remember his name? That’s what made me upset and cry even more,” she told “Good Morning America.”

In a 45-minute briefing on Monday, Dunford acknowledged that many looming questions about the attack are still unanswered.

Questions he’s hoping the military’s investigation can uncover include:

“These are all fair questions that the investigation is designed to identify,” he said.