Several of those prototypes are “taking form or are near completion” after two weeks of construction, the US Customs and Border Protection’s San Diego bureau said on Twitter.

The government selected six companies to construct the prototypes, which the agency said are meant to “inform future design standards” for the wall.

Although Trump’s plans for a border wall have been beset by a number of obstacles — including the Senate’s refusal to green-light a $1.6 billion down payment, wavering estimates on the total cost, and a lawsuit from California — his administration has moved ahead with the prototypes.

Eight prototypes are in various stages of completion, and have gone up near the Otay Mesa port of entry in San Diego, California. Four of the prototypes are concrete walls. The other half are made of “other materials”, which have not been specified. At least one of the prototypes appears to have the “see-through” component Trump has mentioned in several rallies and interviews. The president has explained that the transparency will allow people on the US side to avoid getting hit by “large sacks of drugs” catapulted over the wall. Each of the prototypes is expected to be between 18 and 30 feet high. Construction crews first broke ground on September 26. The construction is taking place along the border shared with Tijuana, Mexico, near the current fencing.

CBP tweeted video of the initial construction, saying the prototypes are being designed to “deter illegal border crossings.” 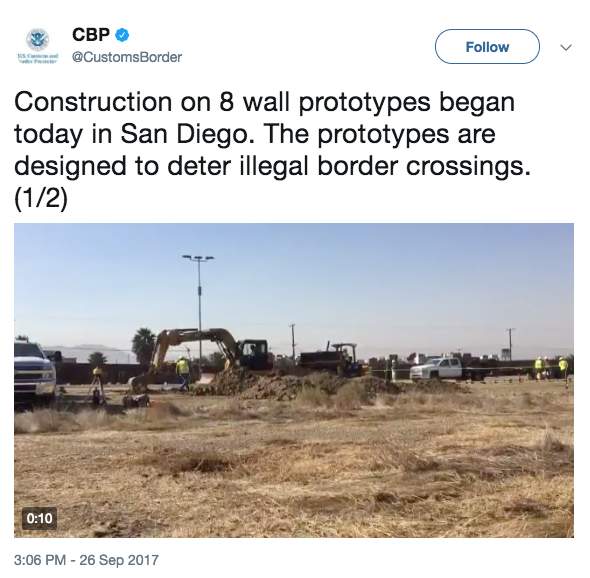 A New York Times columnist went to North Korea, and said he's never seen so much anti-American propaganda there