Russia claims US ‘pretends’ to fight ISIS in Iraq and Syria

Russia is accusing the United States of “pretending” to fight ISIS in Iraq and Syria.

The Russian Defense Ministry in a statement Tuesday said that the U.S.-led Coalition airstrikes were reduced in Iraq during September, when Syrian forces started to retake Deir al-Zor Province on the eastern side of the country, which borders Iraq. 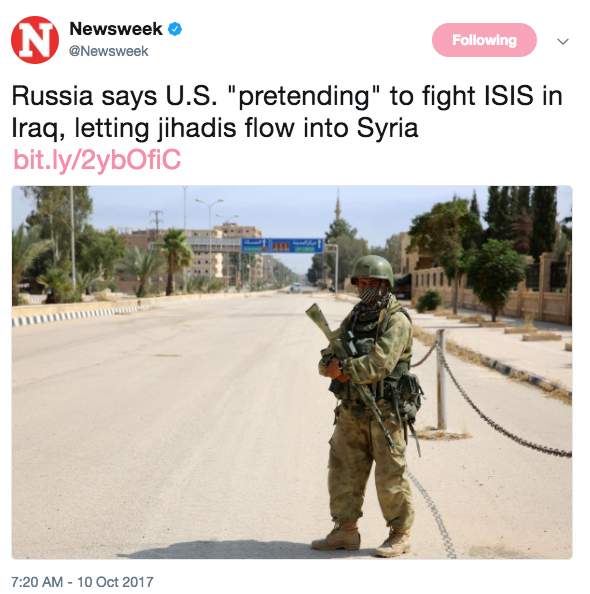 Russia says the U.S. reduced its airstrikes there in order to let more terrorists into Syria. Russia backs Syrian forces that are fighting to retake the Province.

“Everyone sees that the U.S.-led coalition is pretending to fight Islamic State, above all in Iraq, but continuing to allegedly fight Islamic State in Syria actively for some reason,” said Major-General Igor Konashenkov, a spokesman for Russia’s defense ministry, Reuters reported.

Konashenkov continued: “The actions of the Pentagon and the coalition demand an explanation. Is their change of tack a desire to complicate as much as they can the Syrian army’s operation, backed by the Russian air force, to take back Syrian territory to the east of the Euphrates? Or is it an artful move to drive Islamic State terrorists out of Iraq by forcing them into Syria and into the path of the Russian air force’s pinpoint bombing?”