ISIS is still claiming the Las Vegas shooting, and made a more specific claim about the gunman

The Islamic State continues to take credit for last week’s deadly mass shooting in Las Vegas, reportedly offering on Thursday a more specific claim that the gunman had converted to Islam before his rampage.

The militant group, also known as ISIS, claimed in its weekly newsletter that the shooter “converted to Islam six months ago,” according to a translation from the SITE Intelligence Group. The claim is more specific than the group’s initial assertion on Monday that the gunman had converted to Islam “several months ago.” 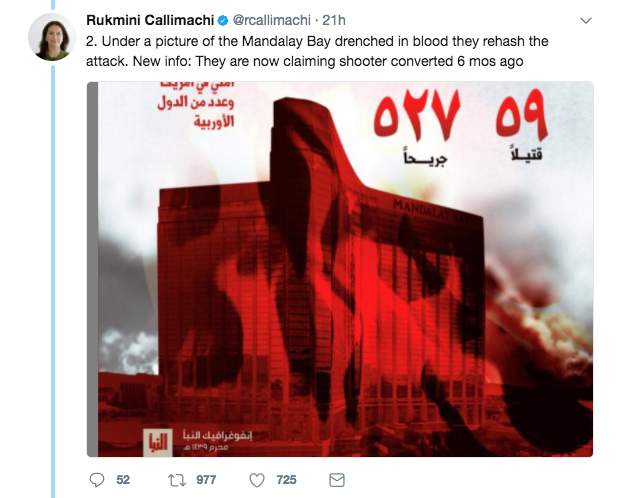 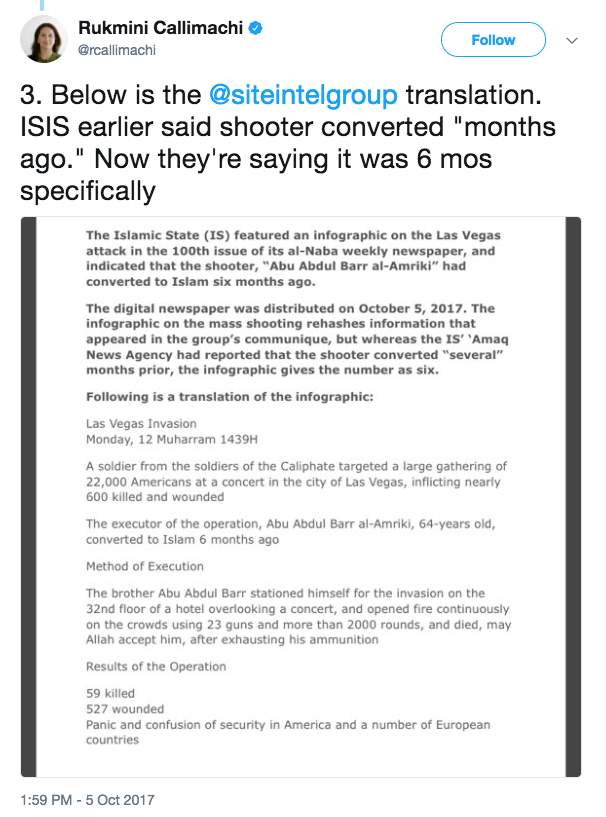 As was the case on Monday, ISIS did not provide evidence for its claim, and authorities in the US have stated they have found no connections between the shooter, Stephen Paddock, and international terror groups.

Thursday’s newsletter referred to the gunman as “Abu Abdul Barr al-Amriki” and included an image of the Mandalay Bay Resort and Casino, the hotel from which Paddock fired on 22,000 concertgoers below, drenched in blood.

Despite the Islamic State’s absence of evidence to support its claim, New York Times correspondent Rukmini Callimachi‏ argued in a series of tweets it shouldn’t necessarily be discounted outright.

As Callimachi wrote, ISIS generally does not take credit for attacks it did not authorize or at least inspire. By that standard, she said she could only find three instances since 2014 in which the group falsely took credit for an incident.

“No proof is provided, but ISIS has rarely claimed attacks that were not by either their members or sympathizers,” Callimachi said.

“Yes, the group frequently exaggerates death tolls & yes, they inflate & distort details, but the crux of the claim is typically correct.”