Footage from a Las Vegas Metropolitan Police Department body cam during the Mandalay Bay massacre has been released, and the footage is chilling and harrowing.

A gunman on Sunday opened fire on a crowd of thousands at the Route 91 Harvest country music festival from the 32nd floor of the Mandalay Bay Resort and Casino. Over the course of about 10 minutes of shooting, he killed 58 people and wounded more than 500 others.

In the body cam footage, which is about three minutes long, police can be seen initially behind a concrete wall, and gunshots can be heard in the background.

The officers see the Mandalay Bay in the background and tell anyone walking toward them to go the other way.

As the officers start moving in, one says: “You guys, get down.”

“Go that way, get out of here, there’s gunshots coming from over there,” the officer says, pointing to the resort.

“They’re shooting right at us, guys, everybody stay down,” one officer says.

Then, when asked where they shots are coming from, another officer responds: “Mandalay Bay, it’s coming out of the windows”

The officers continue to yell and warn other people to “stay back,” and even appear to grab some people and put the under cover behind a vehicle.

This is the body cam footage:

The shooter killed 58 people and wounded more than 500 others before he allegedly shot himself in the head when discovered by police. This is the largest mass shooting in modern U.S. history.

Photos were leaked Tuesday of the shooter’s alleged hotel room.

One photo shows what are allegedly the gunman’s legs on the ground, and what appears to be a note – what some say could be a suicide note – on a small table near him. Bullets and several assault rifles are seen all around the room. There were 23 firearms in the hotel room, including a handgun, a gun similar to an AR-15 rifle and an AK-47 rifle. The gunman had rigged some of the firearms to be automatic weapons. 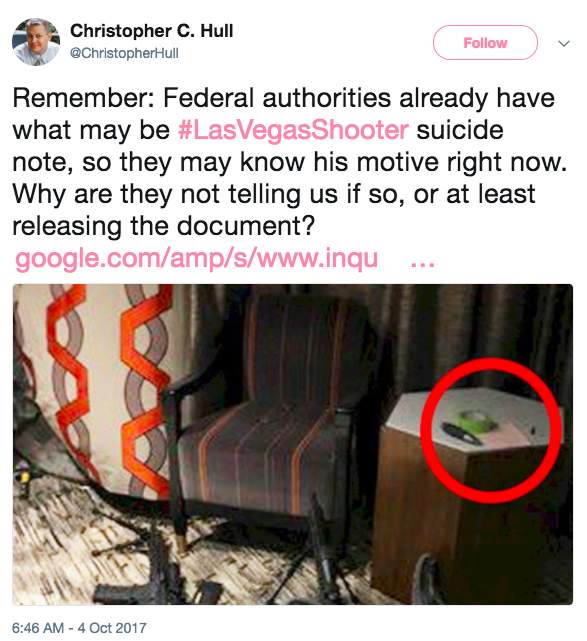 The gunman, 64-year-old Stephen Paddock, went on a shooting spree Sunday night on the 32nd floor of the Mandalay Bay Resort and Casino, where he shot at a crowd of thousands of people at the Route 91 Harvest country music festival across the street.

He killed 58 people and wounded at least 500 others, and Las Vegas hospitals were flooded with injured persons following the massacre.

Paddock reportedly shot himself in the head when he was discovered by police, which has led some reports to say the Las Vegas shooting was responsible for 59 deaths.

Paddock was a millionaire who gambled, but he did not have a criminal record. He reportedly owned 47 guns, all of which he purchased legally over the course of two decades.

It has been reported that Paddock wired $100,000 to the Philippines a few weeks before the shooting, which is where his girlfriend, Marilou Danley, is from. She is now a person of interest.

Police are still searching for a motive.

ISIS initially claimed responsibility for the shooting, saying the shooter had converted to Islam several months weeks ago. But the FBI said it did not believe there was a connection to international terrorism. ISIS also did not offer up any proof or evidence.

Exclusive: We spoke to the Marine who shielded a girl he just met from bullets during Vegas massacre