FBI knew about Russia’s bribery scheme to control US uranium before deal was approved: report

Recent reports have revealed that Russian nuclear industry officials bribed and funneled money to key players in the United States – including the Clinton Foundation – in order to push two uranium deals through under the Obama Administration, all reportedly while there was an ongoing investigation about the scheme within the U.S. Department of Justice and FBI.

These deals were approved by the U.S. State Department, where Hillary Clinton then served as Secretary of State, and they gave Russia significant control over a lot of American uranium. Uranium can yield a great deal of energy, and it generates heat in nuclear power reactors and produces the easily-split material for nuclear weapons.

While the U.S. DOJ investigated the case for four years, the Obama Administration continued to push through two key deals that would greatly benefit Russian President Vladimir Putin. The Hill had the exclusive scoop about this investigation and claims the administration knew about it while the deals were taking place – in short, before the deal was sealed. 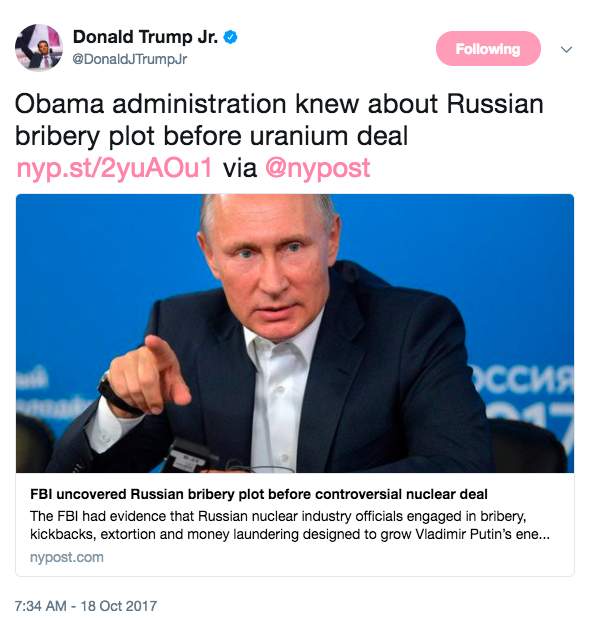 The first uranium deal was approved in Oct. 2010. The State Department and the Committee on Foreign Investment in the U.S. approved the partial sale of Canadian mining company Uranium One to Russia by way of nuclear company Rosatom, which then gave Moscow control of more than 20 percent of the U.S. uranium supply, The Hill reported.

And then in 2011, the Obama Administration approved Rosatom’s Tenex subsidiary to sell commercial uranium to U.S. power plants in partnership with the U.S. Enrichment Corp, where Tenex previously had only been permitted to sell reprocessed uranium from dismantled nuclear weapons.

The Hill reported that the FBI had gathered evidence that Russian officials were involved in bribery before the first deal was even approved in 2010; the Hill cited government documents and interviews.

“They also obtained an eyewitness account — backed by documents — indicating Russian nuclear officials had routed millions of dollars to the U.S. designed to benefit former President Bill Clinton’s charitable foundation during the time Secretary of State Hillary Clinton served on a government body that provided a favorable decision to Moscow, sources told The Hill,” it reported.

President Donald Trump on Wednesday tweeted: “Wow, FBI confirms report that James Comey drafted letter exonerating Crooked Hillary Clinton long before investigation was complete. Many people not interviewed, including Clinton herself. Comey stated under oath that he didn’t do this – obviously a fix? Where is Justice Dept.?”

And, he added: “As it has turned out, James Comey lied and leaked and totally protected Hillary Clinton. He was the best thing that ever happened to her!”

The Obama Administration and the Clintons have denied any knowledge of the bribes. 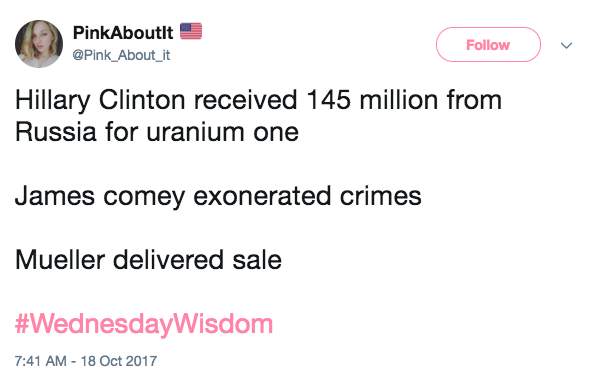 “The Obama administration and the Clintons defended their actions at the time, insisting there was no evidence that any Russians or donors engaged in wrongdoing and there was no national security reason for any member of the committee [on Foreign Investment] to oppose the Uranium One deal,” The Hill reported.

Vadim Mikerin was the main Russian operative in the U.S., and The Hill reported that he “engaged in wrongdoing starting in 2009,” according to FBI, Energy Department and court documents.

“Then-Attorney General Eric Holder was among the Obama administration officials joining Hillary Clinton on the Committee on Foreign Investment in the United States at the time the Uranium One deal was approved. Multiple current and former government officials told The Hill they did not know whether the FBI or DOJ ever alerted committee members to the criminal activity they uncovered.

Between 2009 and January 2012, Mikerin ‘did knowingly and willfully combine, conspire confederate and agree with other persons … to obstruct, delay and affect commerce and the movement of an article and commodity (enriched uranium) in commerce by extortion,’ a November 2014 indictment stated.

His illegal conduct was captured with the help of a confidential witness, an American businessman, who began making kickback payments at Mikerin’s direction and with the permission of the FBI. The first kickback payment recorded by the FBI through its informant was dated Nov. 27, 2009, the records show.

The final court case also made no mention of any connection to the influence peddling conversations the FBI undercover informant witnessed about the Russian nuclear officials trying to ingratiate themselves with the Clintons even though agents had gathered documents showing the transmission of millions of dollars from Russia’s nuclear industry to an American entity that had provided assistance to Bill Clinton’s foundation, sources confirmed to The Hill.”