Nikki Haley, the U.S. ambassador to the United Nations, was evacuated from a United Nations camp in South Sudan amid violent protests against President Salva Kiir, CBS News reported. 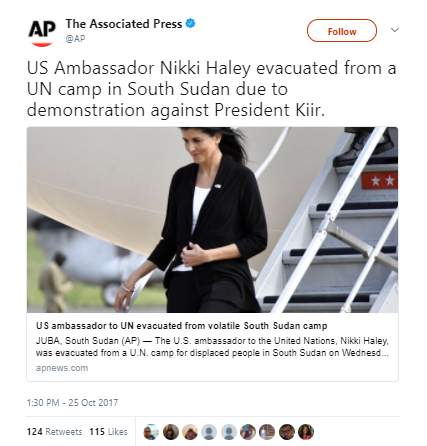 Haley left the U.N. camp as hundreds of protesters demonstrating against President Kiir made their way to the camp.

Haley was in the middle of a three-country visit Wednesday and met with Kiir to discuss the country’s civil war.

Camp residents “became upset that she was not able to meet with them, due to time constraint,” the United Nations told the Associated Press.

After Haley left the camp, U.N. security guards fired tear gas at the protesters, some of which looted and destroyed the office of a charity, a source told the Associated Press.

Camp residents were attempting to hand Haley a letter with their position on the “current crisis.” The U.N. said a “petition” was delivered before Haley departed.

The Associated Press reported that Haley was meeting with a reunified displaced family but had to shorten her visit due to concerns for her safety.

Haley continued on with the rest of her scheduled visit to the country before heading to the Democratic Republic of the Congo.