AMN Gear review: A plate carrier that is 50 percent lighter

Many companies set out to add bells and whistles to their plate carriers to make them more appealing, but Blue Force Gear did the opposite.

Their PLATEminus V2 or simply “PLATE 2″was designed to be the lightest tactical plate carrier available. They eliminated all of the unnecessary bulk and fabric while increasing the strength of the material, resulting in a 50-percent weight reduction compared to other armor carriers.

Weighing only about 3 pounds, the MOLLEminus “holes and slots” saves significant weight by removing fabric, instead of sewing more on to create MOLLE weaving.

When I first saw the plate carrier, I was skeptical because of how thin the material was. However, those doubts were put to rest when I personally witnessed a 240-pound man be dragged 20 yards by the straps. The CORDURA® fabric showed no signs of wear or stress, and I am confident it is just as strong, if not stronger, than the plate carrier the Marine Corps issued to me for Iraq.

It was comfortable to wear empty, and also with Small Arms Protective Insert (SAPI) plates plus loaded magazines. The weight felt evenly distributed over my shoulders and there did not seem a need for additional padding. The adjustable cummerbund held firmly in place while running and did not chafe after several hours of wear.

You are able to pair it with most aftermarket MOLLE attachments. Be advised some of the slits are very thin and won’t take something with a large buckle, but most of the weaving will accommodate. Blue Force Gear has a wide variety of options in pouches and accessories to pair with the PLATEminus V2 that are also very strong and lightweight.

Highly versatile, the PLATE 2 comes prepared to take side SAPI plates, and it comes sized based on your chest/back plates, not your chest or rib size. You can also wear it as just a lightweight load-bearing vest without plates to hold you gear and magazines. It also comes in several different colors: black, coyote brow, OD green, Multicam and wolf grey. 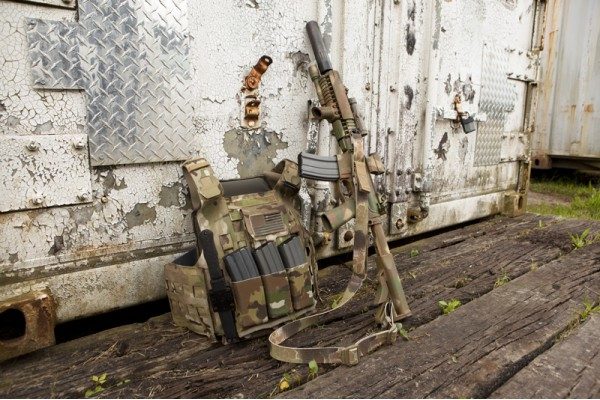 Sun Tzu said “Speed is the essence of war.” I can imagine that making part of your kit weigh 50 percent less is a good way to increase your speed.

Looking at the second and third order effects, carrying a few pounds less than you might have otherwise over the course of a training cycle, deployment or even a career could make a huge difference in the wear and tear on your body.

All opinion articles are the opinion of the author and not necessarily of American Military News. If you are interested in submitting gear for review, please email [email protected]