A photo taken on Sept. 27 that has gone viral while circulating among the online military community shows a man at the Tomb of the Unknown Soldier at Arlington National Cemetery, kneeling down on one knee reportedly during the playing of taps, is outraging thousands.

“Taps” is a bugle call played at dusk, during flag ceremonies, and at military funerals by the United States armed forces and is regularly played at the Tomb of the Unknown Soldier.

Not standing for Taps is incredibly disrespectful which is triggering the intense outrage.

It is unclear exactly why the man seen in the photo is kneeling during taps while everyone else is standing, but most people online are assuming it is in protest.

Katie Wiederhoeft who took the original photo noted that she was so taken aback she didn’t ask the young man why he was kneeling. She noted that he was filming with his phone as well.

If he was indeed protesting, it follows in the footsteps of NFL players’ protests – close to 200 NFL players and coaches took a knee during the U.S. national anthem on Sunday. The protests were started by football player Colin Kaepernick last year to protest what he believes to be problems in America, namely police brutality and black inequality. Kaepernick was not signed by a professional football team this year.

Protocol at the Tomb of the Unknown Soldier is that you stand, and many times the Soldiers who guard the Tomb will directly address people who are not standing and demand they stand.

Katie Wiederhoeft added the caption to the photo:

On our way back from NYC we stopped overnight in DC, one of my favorite places. So rich in history, it’s beautiful, and so clean!

A must see on our list is always Arlington National Cemetery the changing of the guard ceremony. I get pretty emotional thinking about what it represents. Today we got a chance to see the honor guard placing wreaths in remembrance of fallen military members. The honor guard said to remain silent, that military members in uniform were to render a salute and everyone else was to stand and that it would appropriate to place your right hand over your heart. Just as TAPS started…this is what happened. I don’t even think people know what they are doing when they are kneeling!!!! What was going through this young man’s head is beyond me!? I couldn’t do or say anything because my anger and disgust was beyond words. I made sure to stand right next to him with my hand over my heart!!!

I regret not speaking with the young man and finding out what his intentions were. I was so upset at the time and completely speechless, which doesn’t happen often. Part of me was afraid of what his answer would’ve been, what if he was kneeling in protest?! I honestly don’t believe that I would have been able to maintain composure. Out of respect for my fallen brothers and sisters, I chose not to confront him. Hindsight is 20-20, maybe he would’ve answered that his actions were completely unintentional and he was trying to get a better angle (he was video taping). But in light of what our country is currently going through and the fact that the guard specifically stated to stand I can’t help but feel it was in protest. But I guess I’ll never know.

“Someone actually had the nerve to [take a knee] at the Tomb of the Unknown Soldier. That is the definition of absolute trash,” one Twitter user posted. 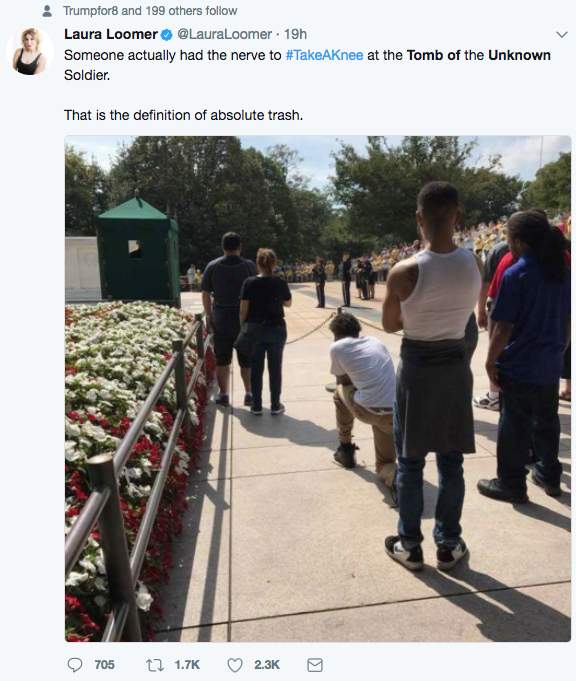 “I support everyone’s right to free speech, but I feel in in the shadow of the Tomb of the Unknown Soldier it is inappropriate,” Zachary Bell tweeted.

The photo is captioned by Wiederhoeft’s father which is the one that went viral: “This photo was taken by my daughter yesterday at the tomb of the unknown soldier while they were playing TAPS. Words cannot express my anger right now. 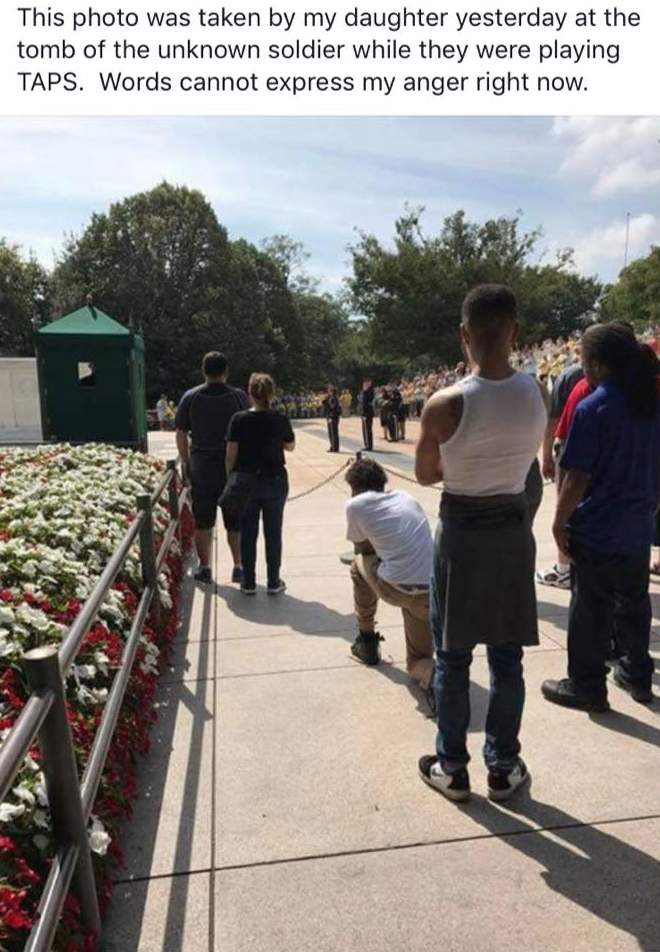 The picture shows everyone there standing, virtually all with their hands over their hearts, except for the one man, who is seen clearly taking a knee.

“The fact that people are kneeling at the [Tomb of the Unknown Soldier] is absolutely sickening,” one Twitter user wrote. “Fu—-g inhumane.”

“Saw a picture of someone taking a knee at the [Tomb of the Unknown Soldier] just makes me sick. I thought it wasn’t about the military,” Reese wrote on Twitter.

“It’s one thing to kneel at a football game… but this is the Tomb of the Unknown Soldier. You fu—-g stand,” the popular brand Tactical SHT posted to Facebook.

SALUTE TRENDING: Taking a knee during the national anthem at major league sporting events has garnered national attention by way of support for some, and outrage for others.

A combat veteran who was visiting Arlington National Cemetery yesterday at the Tomb Of The Unknown Soldier with his daughter snapped a photo of a man kneeling during the playing of TAPS.

Has professional sports protest’s bled onto hallowed ground? Arlington National Cemetery had long been a place of reflection, honor and remembrance.

We want your to know your opinion. Should Americans be able to protest anywhere they choose in a peaceful and quiet matter, or are some places completely off limits?

Share your thoughts. [Tagging other pages] U.S. Infantry, Gruntworks GRUNTS 11 Bravo, U.S. Infantry Soldiers You Might Be a Veteran If.

Here is the full photo: 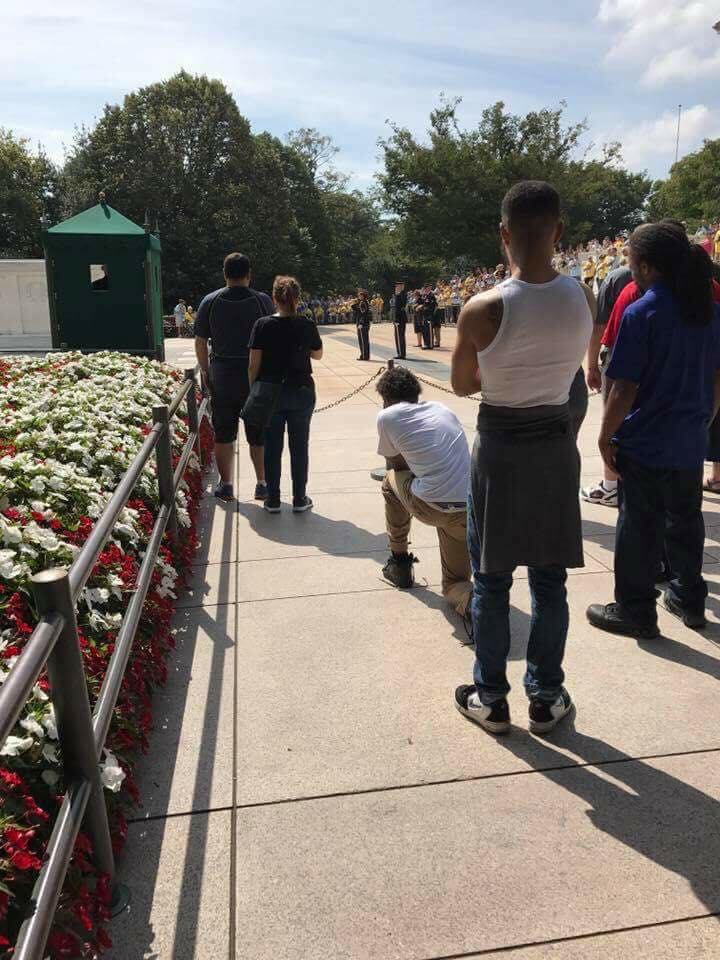 You can listen and watch this hauntingly beautiful video of taps, performed by The U.S. Army Band “Pershing’s Own” Special Bugler and Special Drummer at the Tomb of the Unknown Soldier:

And this is what it looks like when they play taps at the Tomb of the Unknown Soldier:

*UPDATED: September 29, 2017 to reflect the updated comments from the original photographer.