A member of ISIS from Singapore challenged Prince Harry to fight ISIS himself if he is “man enough,” this way the terrorist group can send him and his “Apaches to hellfire.”

In a more than three-minute video, a man who identifies himself as Abu Uqayl threatens Prince Harry, after he previously spoke about terrorism and the London Bridge terrorist attack while on a trip to Singapore in June, The Sun reported. 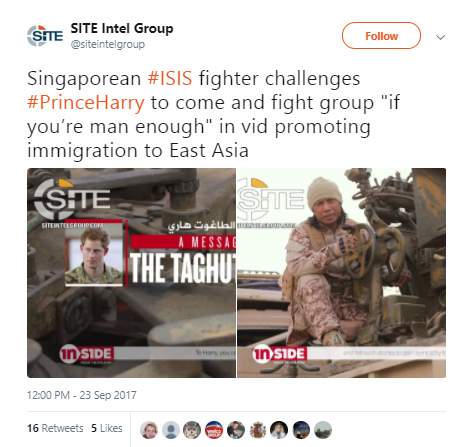 “To Harry, you come to Singapore and tell such stories to gain sympathy for the London terror attacks,” he said in the video. “Why don’t you come here and fight us if you’re man enough, so that we can send you and your Apaches to hellfire, bi’ithnillah [Allah permitting]?”

Prince Harry previously served in the British Army and the Army Air Corps, and flew Apache helicopters in Afghanistan.

ISIS propaganda wing Al Hayat Media Centre released the video in an effort to appeal to Muslims in Southeast Asia so that they join ISIS-affiliated groups.

Over the weekend, Prince Harry launched the opening ceremonies for the Invictus Games, a Paralympic-style sporting event for injured servicemen and women that he created in 2014.