The two U.S. service members who were killed during combat operations in Iraq over the weekend have been identified.

The two were killed from wounds sustained during artillery operations in support of Operation Inherent Resolve. Five other service members were injured during the incident, which is under investigation.

U.S. Army Col. Ryan Dillon, Spokesman for Operation Inherent Resolve (OIR), tweeted: “We mourn the loss of our paratroopers and grieve with their families. Please continue to keep our service members in your thoughts and prayers.” 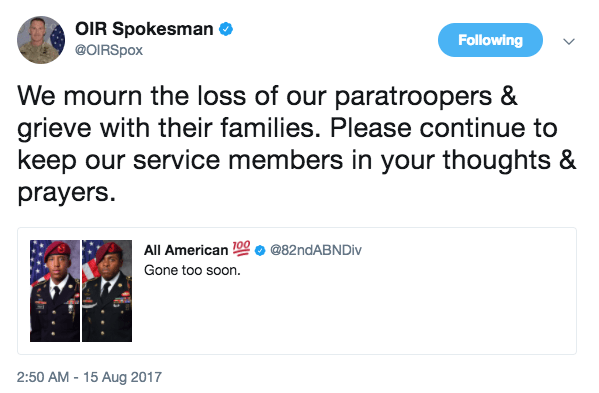 Military.com reported that they died from wounds sustained when an artillery round exploded early; the round was intended for an ISIS target, defense officials told Military.com.

“The entire counter-ISIS Coalition sends our deepest condolences to these heroes’ families, friends, and teammates,” said Lt. Gen. Stephen J. Townsend, commander of Combined Joint Task Force – Operation Inherent Resolve. “There are no words to describe the respect I have for you and sorrow I have for your loss. I hope there is some small solace in knowing their loss has meaning for our country and all the nations of the Coalition as the fallen service members were fighting to defeat a truly evil enemy and to protect our homelands.”