MANSFIELD, Texas — Andy Fancher walked through the front door of yet another stranger’s home last week, eager to meet the 52nd subject for his documentary series.

The 18-year-old wore braces and slicked back hair. He arrived from his home in Duncanville, Texas, carrying a bag of equipment, including two LED bulbs, tripods and a $1,200 camera.

“There he is,” Fancher said, his voice loud and welcoming as he met Norman Gagnon at the door. “Is this the man of the hour?”

Gagnon goes by Bob. He’s a 92-year-old World War II veteran from Massachusetts who served in the Navy from 1942 to 1946. Three months ago, he moved from California to his grandson’s home in Mansfield after the recent deaths of his wife, daughter, son and nephew.

When it comes to war, Gagnon talks about his experiences only when asked.

That’s why Fancher is here. In his free time, the home-schooled high school senior records testimonies of veterans, mostly from WWII, then edits the videos and puts them on his YouTube channel, Andy Fancher Presents.

“I’m preserving their stories,” Fancher says. “In 10 years, we may not have these guys to tell their stories anymore.”

Gagnon sat quietly while Fancher organized the set. He was impressed with all the professional equipment and excited to share his experiences overseas. More important, he was surprised that a complete stranger — a teenager — was interested in recording his story.

Soon, the interview would begin, and Fancher would learn about Gagnon’s upbringing before the war. He’d learn what kamikazes sound like as they fall from the sky, and that Gagnon once saw a torpedo surging through the water.

But before all of that, as Fancher tinkered with the lighting and tested the microphones, Gagnon started the interview with a question of his own.
“What prompted you to do this?”

It all started with the great-grandfather Fancher never met.

Fancher was 9 and looking through family photos when he stumbled on a black-and-white picture of a man in military uniform. Fancher had never seen it before. On the back of the photo it said, “Italy 1945.” This was Fancher’s great-grandfather Gene T. Fancher, who served in the Army during World War II.

Gene died in 1970. Very few people in Fancher’s family knew much about his time overseas. Fancher had questions: What was life like before the war? Did he ever see combat? Was he scared?

But there were no answers.

“If someone had interviewed my great-grandfather, that would’ve been very significant for me to have today, to hear his firsthand account of the war,” Fancher said.

That sparked an interest in the 9-year-old to learn as much as he could about WWII. He watched films, read books and collected memorabilia.

Military memorabilia sits on the dresser of Andy Fancher, 18, on July 12, 2017, at his home in Duncanville, Texas. Fancher has filmed countless hours of interviews with war veterans, including more than 30 WWII veterans. (Ashley Landis/Dallas Morning News/TNS)

But at 16, Fancher realized that the very people who lived during this historical period were dying. So he bought an expensive camera and created a YouTube channel. He would seek veterans and record their stories before it was too late.

A year and a half later, Fancher has now interviewed 52 veterans, both during the school year and summer break. He spends his free time editing the interviews, which last an average of two hours, then mixes in music and WWII footage. The final copy is a YouTube video cut to roughly five minutes. He also writes a short Facebook post on his page about each veteran.

The hardest part of this process is finding veterans. Fancher has driven as far as College Station to record a testimony and relies on word of mouth and referrals to conduct more interviews in the Dallas area.

His most popular video, featuring John Ferris, has roughly 1,000 views. Fancher’s friends never watch the series. Neither does a large portion of his family. He’d love it if more people were interested, but that’s not what’s most important right now.

Five veterans Fancher has interviewed have died since he started the project. Ferris passed away 12 days after filming.

“Capturing these stories now is very important,” he said.

Fancher calls all his veterans on Christmas. He grew so close to Carl Matthews, a WWII Marine who enlisted at age 16, that they continued spending time together until his death in January. Some veterans are so grateful to be interviewed that they give him their personal mementos from war.

One vet gave Fancher his WWII Navy uniform, equipped with navy blue pants and a shirt with a white-striped collar. Another gifted his green Vietnam flak jacket and machete. It’s the same jacket he wore when a land mine killed his best friend and shot a piece of shrapnel through the right vest. 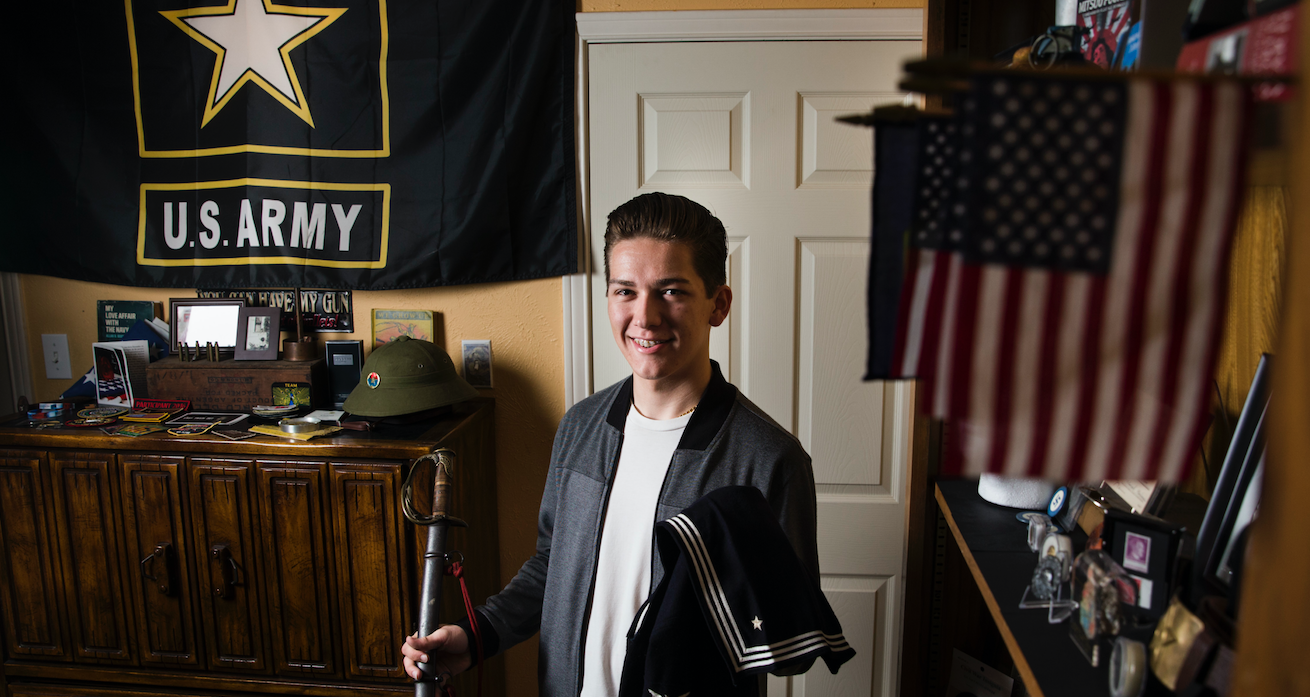 Andy Fancher, 18, poses for a portrait in his bedroom with a civil war saber that’s been in his family for two centuries and a WWII Navy uniform given to him by veteran Louis Beavers, among other military memorabilia, on July 12, 2017, at his home in Duncanville, Texas. (Ashley Landis/Dallas Morning News/TNS)

“These veterans really appreciate what I do,” Fancher said. “I guess a bonding occurs between me and this stranger. So much so, that they want me to leave with something.”

‘RUNNING OUT OF TIME’

The lights were on and the camera was rolling.

Fancher sat with one leg crossed, jotting notes on a pad as he listened to Gagnon’s story.

He laughed with Gagnon when the veteran explained that his parents wouldn’t let him join the Marines. He leaned in when Gagnon said he experienced night terrors years after the war. His eyes widened when Gagnon described just how close he was to the kamikaze pilots.

“When the kamikazes started their drop, there would be this screaming engine, but you never knew which ship it was aiming at,” Gagnon said. “So you crossed your fingers and said, ‘Please don’t hit us.’”

Gagnon’s grandson and great-granddaughter watched the interview from a side table in the kitchen. They were thrilled that Fancher was there. They’d never recorded Gagnon’s experiences and will now have his story preserved for future generations.

The interview lasted 40 minutes. Fancher’s final question was the same one he asks every veteran.

“Is there anything you want to be remembered for?”

“I’m getting remembered every time somebody says, ‘Thanks for what you did.’”

Fancher stood and shook Gagnon’s hand. He thanked him, and asked if he could have a photo —something he always does at the end. Some of these photos are printed and framed in Fancher’s bedroom.

It will take about a month to edit the video, but when it’s done, Fancher hopes people will watch Gagnon’s story. He hopes they’ll learn what someone did to protect the freedom of this country. That it encourages people to ask their grandparents or great-grandparents questions about WWII.

And that it spreads the message of his project.