Over the past several weeks, the People’s Liberation Army Navy (PLAN) has demonstrated the ability to deploy its naval forces far from Chinese waters and provide logistic support to keep those warships at sea.

For years only a regional naval power, China has now set its sights on establishing a global naval presence. With the world’s second largest navy behind only the United States, China has made dramatic gains in the last 25 years. Fueled by the incredible growth of the Chinese economy, the PLAN is no longer beholden to operate obsolete and technologically inferior vessels. Chinese shipyards are now operating at an incredibly high rate of construction, producing ships that feature advanced sensors and weapons, including the first domestic Chinese aircraft carrier.

For the first time in history, Chinese warships joined elements of the Russian navy in the Baltic Sea for a large naval exercise, Joint Sea 2017. Three Chinese ships – a Type 52D destroyer, a Type 054A frigate and a supply ship – and 10 Russian ships participated. The Chinese ships travelled 10,000 miles to the Baltic from their home ports, passing through the Mediterranean, where they held gunnery exercises. The cooperation by China and Russia in the congested Baltic did not go unnoticed by NATO, as many nations sent ships to observe the passage of the Chinese ships. While falling well short of a military alliance, the Chinese-Russian exercise is a sign of the growing cooperation by the two nations, and a clear signal that the era of American and NATO naval supremacy is no longer guaranteed. 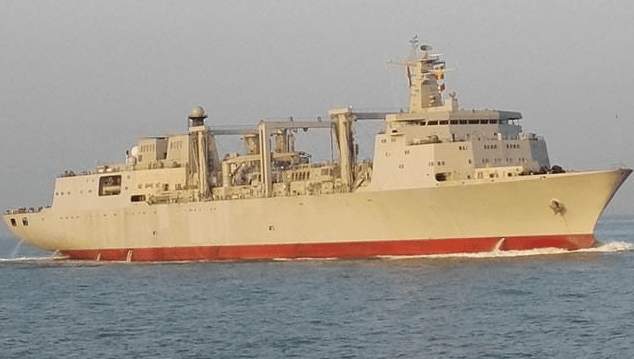 Perhaps more important than the warships in the Mediterranean and the Baltic, was the news that China had finally commissioned the first of the Type 901 fat combat support ship (AOE).

At 45,000 tons, the Type 901 is very similar in size and look to the U.S. Navy’s Supply-class of replenishment ship. The Type 901 was first spotted under construction in 2015, and is designed to support China’s aircraft carriers, one of which is currently operational. With the size and speed to transfer large amounts of fuel and aviation supplies, the Type 901 will only quicken the PLAN’s education in the operation of carrier strike groups. A second Type 901 is also under construction, as is the second Chinese carrier, which is not coincidental at all.

In the nation of Djibouti on the Horn of Africa, China recently celebrated the opening of its first overseas naval base.

Sitting practically next door to the American military base in the same country, the Chinese facility will be used to re-supply its warships that sailed across the Indian Ocean to participate in humanitarian, anti-piracy and various peacekeeping missions in the region. The base in Djibouti will also serve as the first of what is expected to be many forward Chinese facilities to help the nation manage its growing economic, political and military global footprint.

In 2016, the PLAN put 18 new ships into service. The U.S. Navy commissioned six. At the end of June, China continued its path toward modernization as the force eyes parity with the American and Japanese navies, when it launched the first of the PLAN’s Type 055 destroyers. The 10,000-ton warship is the largest surface combatant warship built by an Asian power since the end of World War II. With the capacity for well over 100 missiles, the offensive and defensive possibilities are nearly equal the capital warships of the U.S. Navy, the Ticonderoga-class cruisers.

With large numbers of ships arriving each year to the PLAN, it is expected that China will continue to operate those warships farther and farther from home for longer periods of time. And as the nation begins to add new overseas bases like the one in Djibouti, the sight of Chinese warships operating around the world will become more common. Despite acts of friendship, such as Chinese frigates helping in the search for an overboard American sailor in the South China Sea, the global rivalry between China and other naval powers such as American and India, is only just beginning.