These days, the world certainly has its eyes on North Korea. Last month, Kim Jong Un and Pyongyang successfully tested two intercontinental ballistic missiles (ICBMs), respectively. Officials have said the U.S. is ever-ready to defend, and that North Korea should be careful as to what happens next.

And recently, National Security Advisor H.R. McMaster spoke to MSNBC’s Hugh Hewitt, who asked him if Kim Jong Un should be “sleeping easily at night.” 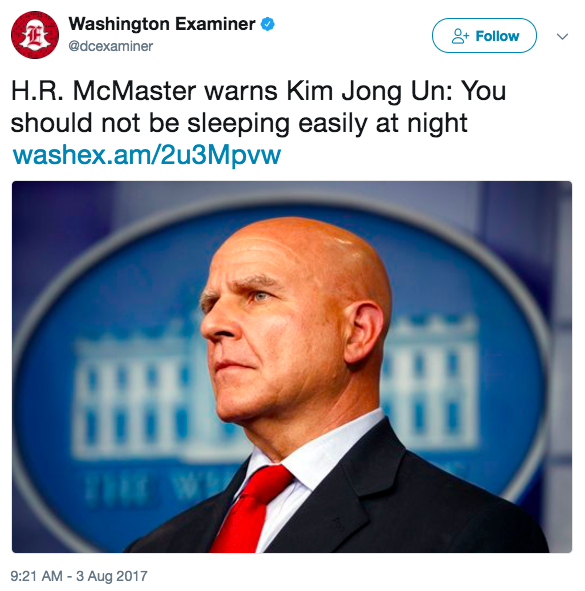 “No, I think he should not be,” McMaster said. “Because he has the whole world against him, right? He’s isolated. He’s isolated on this. Since 1953, the Korean Peninsula has been in a state of armistice. The war never formally ended and there’s been no aggression, no aggression from the United States, South Korea, any of our allies.”

McMaster also said the dictatorship in North Korea is “almost impossible” to predict, and that regardless of where any nuclear missiles could land in the U.S., they are a “grave threat” to the nation.

“What is clear is that it is an authoritarian dictatorship that has existed since the end of World War II,” McMaster said of North Korea’s leadership. “It is now in its third generation. And there is a difference in this third autocratic ruler [Kim Jong Un] in that he’s as brutal as the previous two had been. But he’s doing some things differently; he’s killing members of his own family. And so, what this means for the future of that regime I think is almost impossible to predict.”

And, McMaster added: “Whether [an ICBM] could reach San Francisco or Pittsburgh or Washington. […] How much does that matter, right? It’s a grave threat.”