There are more than 1.1 million illegal aliens in this country who have used stolen Social Security numbers to report taxes, according to a recent U.S. Treasury Inspector General for Tax Administration (TIGTA) report.

After conducting a review of more than 1.3 million electronically filed prior-year 2015 tax returns with an ITIN or SSN mismatch – meaning the identification numbers provided did not match that person’s records, the TIGTA identified about 86 percent, or roughly 1.1 million returns, where the ITIN filer used a valid Social Security Number issued by the Social Security Administration to gain employment, according to the report.

This means that the filers used someone else’s identifying information – their Social Security numbers – to file their taxes.

The report also pointed out that the current system in place is “not identifying all employment identity theft victims.”

On its Twitter page, the Internal Revenue Service often encourages those who use use ITINs to both make sure they are from a reputable CAA (Certified Acceptance Agent) and that they are not expiring. 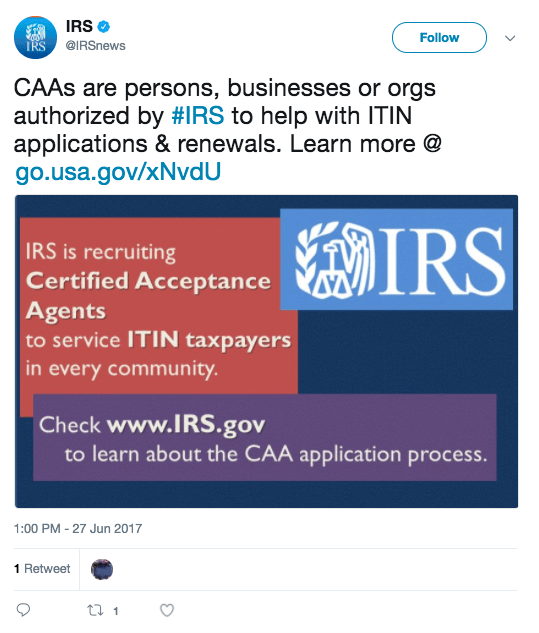 The IRS says ITIN filers “trust CAAs to authenticate their info and submit it” to the IRS. 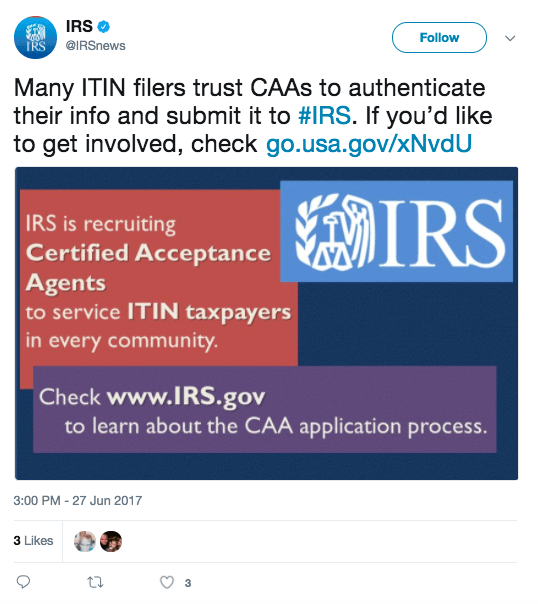 “Cases of employment identity theft identified by the IRS frequently involve an ITIN filer who uses the SSN of another individual to gain employment,” the recent TIGTA report stated. “This can cause significant burden to innocent taxpayers, including the incorrect computation of taxes based on income that does not belong to them.”

“Employment identity theft can occur if an ITIN is used as either the primary or secondary Taxpayer Identification Number on the Form 1040 tax return, and a Form W-2 included with the return has a [Social Security Number] that does not match either the primary or secondary taxpayer on the front of the tax return,” the report explained. “The IRS [Internal Revenue Service] refers to these cases as ITIN/SSN mismatches.”

The IRS receives about 2.4 million Form 1040 tax returns filed using an ITIN, according to the TIGTA.

“Resident aliens must follow the same tax laws as U.S. citizens,” the report stated. “Specifically, income from all sources (both within and outside the United States) is taxed, and the same tax forms used by U.S. citizens are required to be filed.”

Anyone filing a tax return is required to include a Taxpayer Identification Number, which identifies an individual.

“For the majority of filers, this is their SSN,” the TIGTA said. “In Calendar Year 1996, the IRS created the ITIN to provide Taxpayer Identification Numbers, when needed for tax purposes, to individuals who do not have and are not eligible to obtain an SSN.”

“ITINs are issued regardless of an individual’s immigration status because both resident and non-resident aliens may have a U.S. filing or reporting requirement under the Internal Revenue Code,” the report said. “An ITIN is to be used for Federal tax reporting only and does not authorize an individual to work in the United States or provide eligibility for Social Security benefits or the Earned Income Tax Credit.”

“Cases of employment identity theft can cause significant burden to innocent taxpayers, including the incorrect computation of taxes based on income that does not belong to them,” said J. Russell George, Treasury Inspector General for Tax Administration, according to a Treasury press release.

Kim Jong Un taunts US: There are more 'gifts' for the 'American bastards' after launching an ICBM