A popular Russian media outlet published an article on the internet mocking Sen. John McCain after he was diagnosed with brain cancer, and their headline suggested they have started a death countdown.

The Arizona senator on Wednesday was diagnosed with an aggressive brain tumor following a blood clot removal above his left eye on July 14.

According to McCain’s doctors, McCain has glioblastoma, an aggressive form of cancer.

While many people, such as President Donald Trump, Vice President Mike Pence and former President Barack Obama have expressed their support for the senator, Russian media outlet Russia Insider was excited to hear the news that Senator McCain has brain cancer.

The title of their article read: “Better Late Than Never! McCain Has Brain Cancer, 14 More Months to Go!”

Meanwhile, politicians across the U.S. showed their support for McCain. 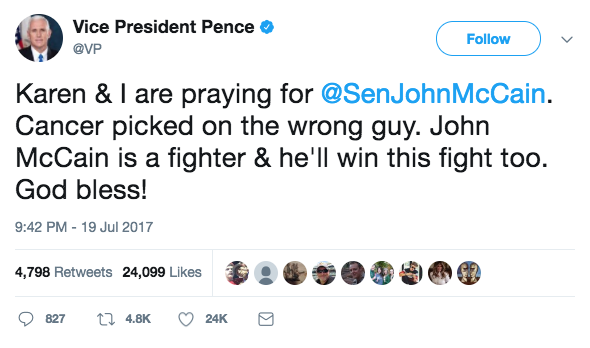 Even Democratic politicians tweeted their support: 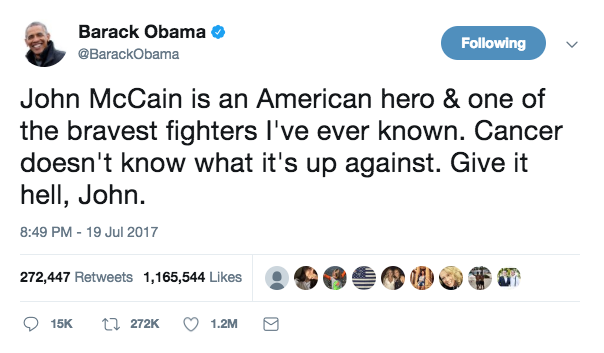 At the end of its article, Russia Insider posted a GIF of a woman sarcastically crying, as a way for the news outlet to express their feeling toward learning McCain’s diagnosis.

On Facebook, the caption of the article read, “Brain cancer diagnosed with brain cancer!”

Russia Insider is sometimes known for its anti-American dialogue and sensational headlines.

Last Friday, Senator McCain underwent a surgery to remove a blood clot above his left eye, which was associated with a tumor.

The senator has since been recovering at his home in Arizona and considering treatment options, including a combination of chemotherapy and radiation.

On Thursday, Senator McCain tweeted that he will be back soon.