ISIS livers for lunch, anyone?

Philippine President Rodrigo Duterte had a visceral reaction to finding out that two Vietnamese soldiers who had been held hostage had been discovered dead. He vowed to eat the livers of the terrorists who did it – lightly seasoned, of course.

“I will eat your liver if you want me to. Give me salt and vinegar and I will eat it in front of you,” Duterte reportedly told local officials this week, while he held up photos on a phone of the deceased soldiers, according to a report in Newsweek. “I eat everything. I am not picky. I eat even what cannot be swallowed.” 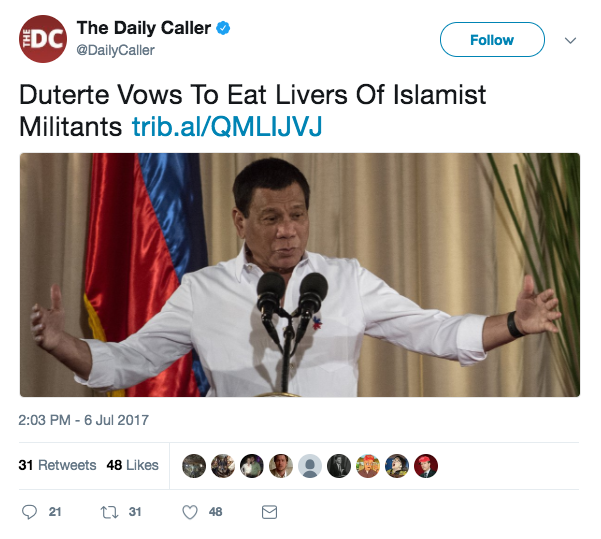 The sailors’ remains were found by Philippine troops off Mindanao, an island in southern Philippines, and the country’s military said Abu Sayyaf is responsible.

Abu Sayyaf is a radical Islamist group that had also attacked other sailors.

Duterte is known to make outrageous statements, as he has called former President Barack Obama the “son of a whore.”

Op-Ed: The SHUSH Act is not something to be quiet about