Lawmakers load up new legislation that would make suppressors unregulated

Republicans recently introduced the SHUSH Act, or the “Silencers Helping Us Save Hearing” Act, in the U.S. Senate and House.

The SHUSH act would remove suppressors, or a sound-muffling device, on firearms from federal regulations and also treat suppressors as any other firearm accessory, which means they would be free from the background check process, according to Gun Owners of America (GOA).

“The SHUSH Act will help restore the rights of gun owners by not only removing suppressors from the National Firearms Act list, but also removing the requirement for NICS background checks for purchase,” GOA Executive Director Erich Pratt told American Military News. “While GOA has always opposed the NFA and NICS background checks, freeing suppressors from these gun control restraints will be another step towards the true intent of the Second Amendment.” 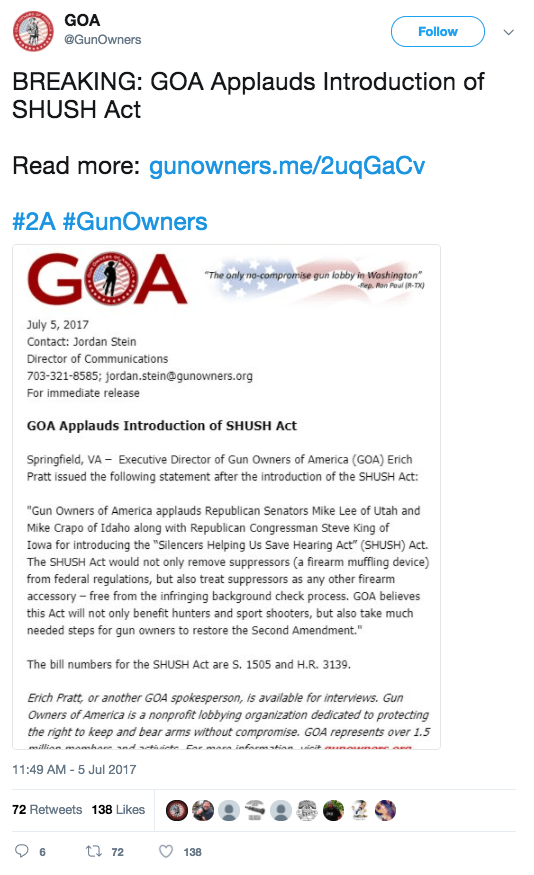 “GOA believes this Act will not only benefit hunters and sport shooters, but also take much needed steps for gun owners to restore the Second Amendment,” GOA said in a press release.

Two Republican Senators, Mike Lee of Utah and Mike Crapo of Idaho, and Republican Congressman Steve King, of Iowa, introduced the respective bills, whose numbers are S.1505 and H.R. 3139.

Op-Ed: Special Operations will be called upon again to deal with North Korea