Joint Chiefs Chairman: ‘It’s unimaginable to let North Korea have an ICBM that could hit Denver’

Gen. Joseph Dunford, Chairman of the Joint Chiefs of Staff, recently attended the Aspen Security Forum in Colorado, where he addressed several challenges the United States is faced with – including the possibility of North Korea launching an intercontinental ballistic missile (ICBM), and also what the U.S. should do to prevent that possibility. 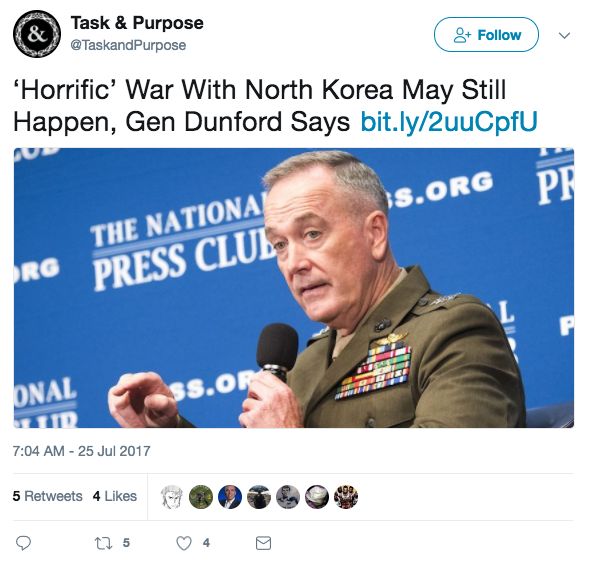 “Many people have talked about military options [against North Korea] with words like ‘unimaginable.’ I would shift that slightly to ‘horrific.’ It would be a loss of life unlike any we have experienced in our lifetimes,” he said. “Anyone who has been alive since World War II has never seen the loss of life that could occur if there is a conflict on the Korean peninsula.”

The chairman was clear that diplomacy should be exhausted first, but he said the U.S. is ready with military options if diplomacy doesn’t work.

The full interview can be seen here: