However, the U.S. Navy said the Iranian vessel was approaching at a “high rate of speed” while the USS Nimitz was on regular patrol in the area. 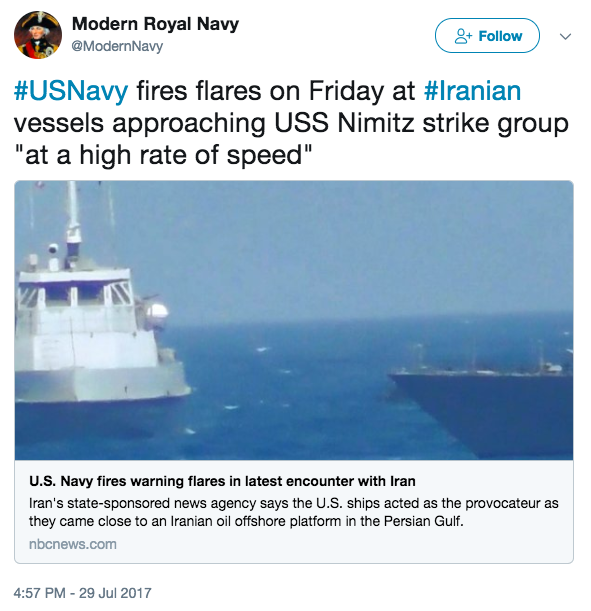 The Islamic Republic News Agency (IRNA) said the IRGC reported that the Nimitz and another ship approached the Iranian offshore oil platform, fired flares and flew a helicopter near the vessel, which is armed by the IRGC.

“The Americans made a provocative and unprofessional move by issuing a warning and shooting flares at vessels,” according to a statement from the IRGC that was published by its news site. “Islam’s warriors, without paying attention to this unconventional and unusual behavior from the American vessels, continued their mission in the area and the aircraft carrier and accompanying battleship left the area.”

The U.S. Navy described the incident as “safe and professional,” according to a report.

“The U.S. Navy’s Bahrain-based 5th Fleet said the incident happened while one of its helicopters was on a routine patrol in international airspace,” according to the report. “The aircraft saw several Guard vessels approaching US ships ‘at a high rate of speed’ and sent out flares after receiving no response when it tried to establish communications, the Navy said. That prompted the Iranian boats to halt their approach.”

Then, after communications were established, the Iranians conducted a “gun exercise,” firing into the water away from the American ships, the report stated.

The confrontation took place Friday afternoon and the Navy ships left the area afterward, according to a report.

The U.S. Navy’s Bahrain-based 5th Fleet had no immediate comment, according to the report.

Last week, on Tuesday, a Navy ship fired warning shots at an Iranian patrol boat in the Persian Gulf.

Video of the shots being fired has since been released.

The Iranian boat, believed to be operated by the Iranian Revolutionary Guard Corps, came within 150 yards of the USS Thunderbolt, a Cyclone-class patrol ship, that was involved in an exercise with other American vessels in the Persian Gulf.