It seems that many people have smelled what CNN is cookin’ – at least according to the internet.

The news network has recently taken some punches for its editorial decision to seemingly – and blatantly, on the internet – threaten a Reddit user who created a video with President Donald Trump “wrestling” CNN.

The President on Sunday tweeted the video of himself bodyslamming CNN at Wrestlemania.

The video was from when Trump participated in Wrestlemania 23 in 2007, when he squared off against WWE CEO Vince McMahon during the “Battle of the Billionaires.” But the video had been edited so that Trump was clotheslining and punching a man with CNN’s logo as his head.

Trump is a harsh critic of the news media – specifically CNN – for publishing “Fake News.” The President now refers to CNN as “Fraud News CNN.”

CNN later published a story titled “How CNN found the Reddit user behind the Trump wrestling GIF.” CNN went to great lengths to find and contact the user, known as HanA**holeSolo, and apparently discovered his identity.

In their article, they also threatened to reveal the user’s name should he reneg on his apology and his promise not to “repeat this ugly behavior.”

“CNN is not publishing ‘HanA**holeSolo’s’ name because he is a private citizen who has issued an extensive statement of apology, showed his remorse by saying he has taken down all his offending posts, and because he said he is not going to repeat this ugly behavior on social media again,” CNN reported. “In addition, he said his statement could serve as an example to others not to do the same.”

“CNN reserves the right to publish his identity should any of that change,” the news agency added.

The network has since come under fire for publishing this, particularly the last sentence.

CNN on Wednesday put out a statement and said they did not publish the Reddit user’s identify “out of concern for his safety.” 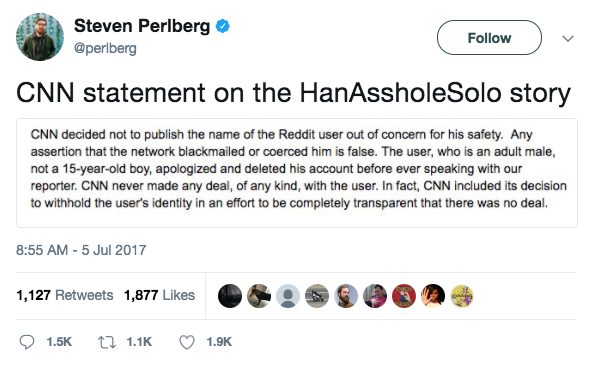 “Any assertion that the network blackmailed or coerced him is false,” CNN said. “The user, who is an adult male, not a 15-year-old boy [as it was initially reported], apologized and deleted his account before ever speaking with our reporter.”

CNN reporter Andrew Kaczynski tweeted July 4 that “[this] line is being misinterpreted,” referring to the statement: “CNN reserves the right to publish his identity should any of that change” 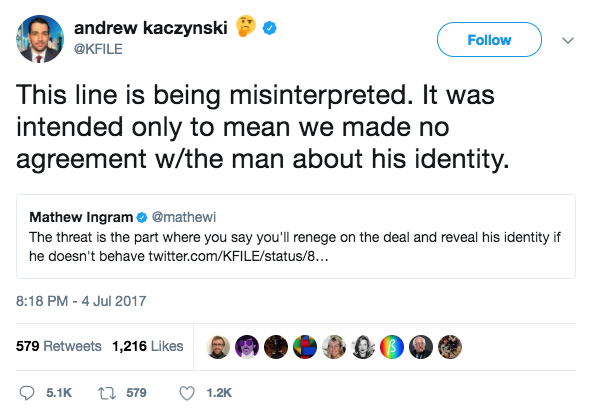 “It was intended only to mean we made no agreement [with] the man about his identity,” he added.

While President Trump has not yet tweeted anything further about CNN, he often refers to the network and other major news publications as “Fake News” and recently tweeted: “I am thinking about changing the name #FakeNews CNN to #FraudNewsCNN!”