Army says 2,100 soldiers will deploy to Iraq this fall

Last week, the U.S. Army announced that 2,100 more soldiers will deploy to Iraq this fall in support of Operation Inherent Resolve.

The soldiers from the 10th Mountain Division at Fort Polk, Louisiana, will deploy as part of a regular rotation of forces, the Army said. 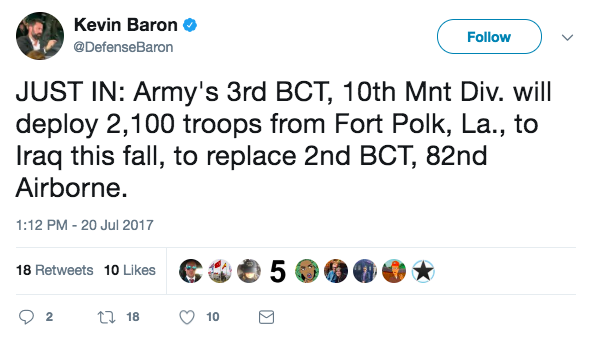 “Our soldiers have spent the last year preparing for this mission and are ready to handle any threat anywhere. Without their sacrifice and efforts, our unit would not be the combat focused force it is,” said Col. Brian Sullivan, the brigade commander, in a statement. “I want to extend heartfelt gratitude to our soldiers and their families for everything they have done and continue to do.” 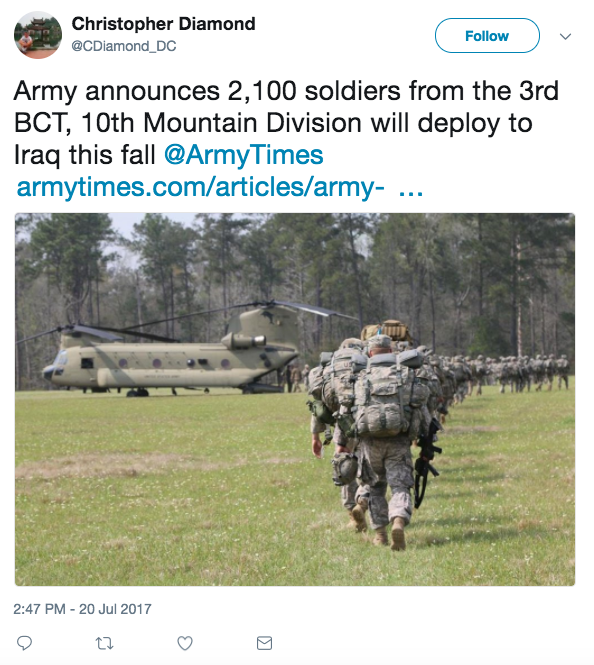 The soldiers from the 10th Mountain Division have been training with soldiers from the 36th Infantry Division (ID) of the Texas Army National Guard since March 2016, the Army said, and this will be the first brigade-sized deployment that is part of the Associated Units Pilot Program.

This program pairs active duty Army units with Army Reserve and Army National Guard units; they train together and potentially will deploy together.

The 3rd BCT will maintain a presence at Fork Polk, the Army said, to train and continue the partnership with the 36th ID.

The brigade will maintain a presence at Fort Polk to train for future deployments and continue their partnership with the 36th Infantry Division, officials said.

“During the last several months, the Patriots have worked hard and completed multiple training events to include a Joint Readiness Training Center rotation in preparation for this important mission,” said Maj. Gen. Walter Piatt, commander of the 10th Mountain Division, according to a report. “I am extremely confident and proud of the entire 3rd Brigade team.”