The U.S. Marine Corps is taking a new step forward by looking into the practical application of psychological screening tools during drill instructor pre-screenings in order to cut down on the seemingly never-ending cries of hazing coming from both east and west coast Marine Corps Recruit Depots (MCRD).

The tests could prove an efficient way to pinpoint issues in a Marine’s behavior that may not be picked up during verbal interviews or through command sponsored checklists.

The commander of MCRD Parris Island, Brig. Gen. Austin Renforth, mentioned that the new program is in its infancy, but could be crucial to curbing issues related to recruit mistreatment.

“What we’re looking at is, [is] there a good test for us to give to the drill instructor candidates? Is there a good test once they come here, to maybe identify those individuals who don’t have what it takes to be a drill instructor,” asked Reforth. “That’s tough, because you don’t want somebody to have a bad day on Sunday, and he doesn’t get the opportunity to be a drill instructor. So it’s got to be something that we can factor in enough to identify a potential issue. There’s more work to be done on that.” 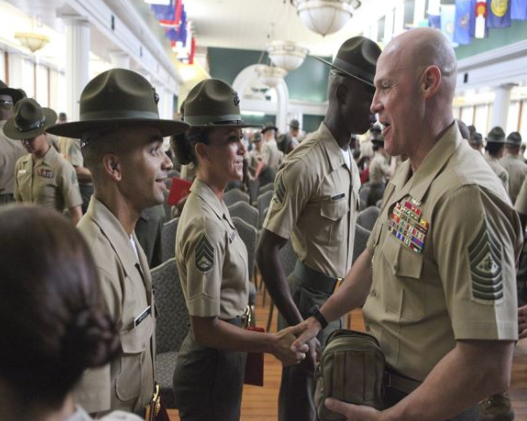 This is not the first time the Marines have toyed with non-cognitive testing.

Recruiting command tinkered with the idea of using the psychological testing in order to find out which candidates slated for Officer Candidate School (OCS) had the best chance of success in the program. They found that certain character traits may have been masked during one-on-one interview sessions and other recruiting methods, allowing them to have an inaccurate picture of the overall candidate.

Although the basic outline of testing is there, it’s implementation is a little less clear at the time.

“We haven’t signed up for any specific testing yet that we think is right for what we have here,” Renforth said, noting that they had already looked over some long-term plans and decided against them.

The Corps continues to weigh its options, hoping to implement a force-wide vetting system for all Marines attempting a special duty assignment.