Russia recently stated on Facebook that the ongoing presence of U.S. Marines in Norway will only increase tensions between Norway, Russia and the United States. The statement was issued on the tails of U.S. officials saying the Marines will remain in Norway a year longer than expected.

Three hundred and thirty U.S. Marines will remain in Norway for the foreseeable future, at least a year longer than was originally planned. The U.S. forces are based near the western city of Trondheim, nearly 900 miles from the Norwegian and Russian border.

Russia has solidified its stance against Norway and the U.S. by telling Norway that any U.S. military deployment in the country will hit diplomatic ties and cause rifts between the two nations.

Saturday, the Russian Embassy’s administrator in Norway took to Facebook to speak about the ongoing interaction and rising tensions between Russia and Norway. 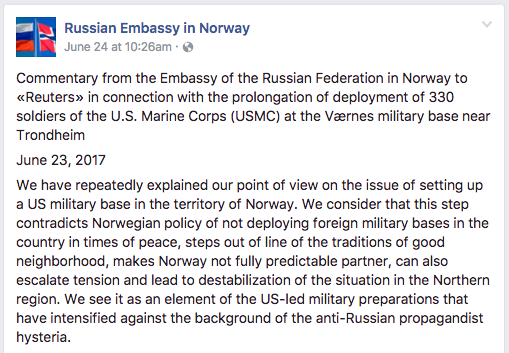 “We have repeatedly explained our point of view on the issue of setting up a U.S. military base in the territory of Norway,” the Russian Embassy in Norway wrote on Facebook. “We consider that this step contradicts Norwegian policy of not deploying foreign military bases in the country in times of peace, steps out of line of the traditions of good neighborhood, makes Norway not fully predictable partner, can also escalate tension and lead to destabilization of the situation in the Northern region.”

Both Russia and Norway have accused each other of raising tensions in recent years, citing increased military presence and drills in various key border areas and other areas of interest.