A Canadian sniper in Iraq has shattered the record for the world’s longest confirmed kill in military history by taking out an ISIS militant from a distance of 11,319 feet, a military source told The Globe and Mail.

According to the paper, a member of Joint Task Force 2 killed an ISIS insurgent from more than two miles away.

For security purposes, the name of the sniper and his partner were withheld. The location of the kill was also not mentioned. 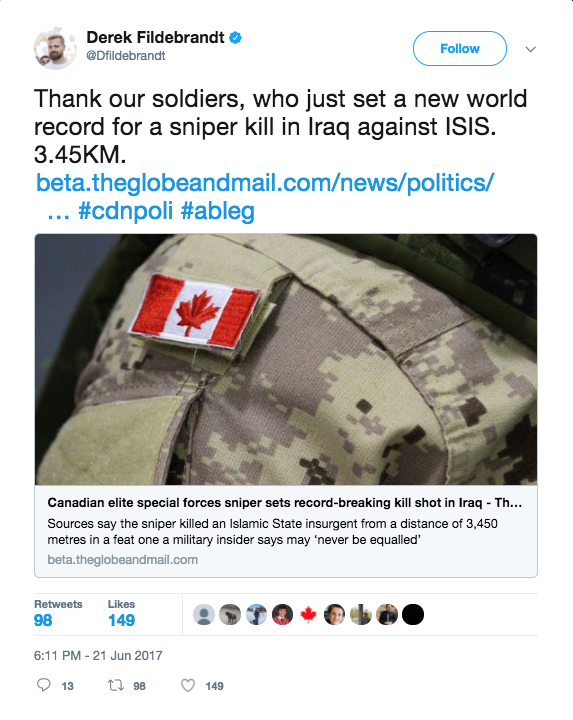 The Canadian sniper used a McMillan TAC-50 sniper rifle from a high-rise position during an operation in Iraq last month. It took under 10 seconds for it to hit the ISIS militant.

“The shot in question actually disrupted a Daesh [ISIS] attack on Iraqi security forces,” a military source told the paper. “Instead of dropping a bomb that could potentially kill civilians in the area, it is a very precise application of force and because it was so far way, the bad guys didn’t have a clue what was happening.”

British Corporal Craig Harrison previously held the record for the longest confirmed kill in history. In November 2009, Harrison killed a Taliban insurgent with a 338 Lapua Magnum rifle at a range of 8,120 feet.

“Canada has a world-class sniper system. It is not just a sniper. They work in pairs. There is an observer,” a military source told The Globe and Mail. “This is a skill set that only a very few people have.”