Op-Ed: Experiencing both sides of the wire in Cuba, both at Guantanamo Bay and Havana

All opinion articles are the opinion of the author and not necessarily of American Military News.

If you are interested in submitting an Op-Ed, please email [email protected]

Havana and Guantanamo Bay may be on the same island of Cuba, but they are two very different worlds.

I belong to a small group of individuals who have been to both. It all began with an unexpected question: “Do you want to go to Cuba,” my First Sergeant asked me. I had done four deployments to the Middle East and my newfound desk job was eating away at my soul.

Without even asking any questions, I said yes. All I wanted was to get back overseas. This wasn’t my usual kind of deployment, but they said I would have an important role. After my name was submitted, I began to wonder what was in store for me.

I watched the scene from “A Few Good Men” where Jack Nicholson famously said “I eat breakfast 300 yards from 4,000 Cubans who are trained to kill me…” I became nervous and excited at the idea of being in hostile territory again.

In 2014, I arrived to Naval Station Guantanamo Bay, and I was shocked to see how much like a normal base it was.

There are more than 5,000 people on base, including many spouses and children. The famous prison is only a small aspect of this base that rests on the land the Navy and Marine Corps fought the Spaniards off of in 1898.

Nearly any accommodations or luxuries you would find on any other Naval base were found here. There were large windmills, schools and water sports. I had never thought people raised families there. Despite the McDonald’s, golf course and Irish pub, one cold reality was never far from mind. There was a fence manned by armed Marines, and a massive minefield in between you and a Communist government.

The base only covered 45 square miles of land and water, most of which consisted of the bay itself and impact zones for machine gun fire that was restricted for safety. Driving the base speed limit of 25 miles per hour, it only took 30 minutes to drive from one end of the base to the other. We were only allowed to leave the base via plane back to the U.S. when appropriate. For many, they were stationed there for a minimum of 3 years. 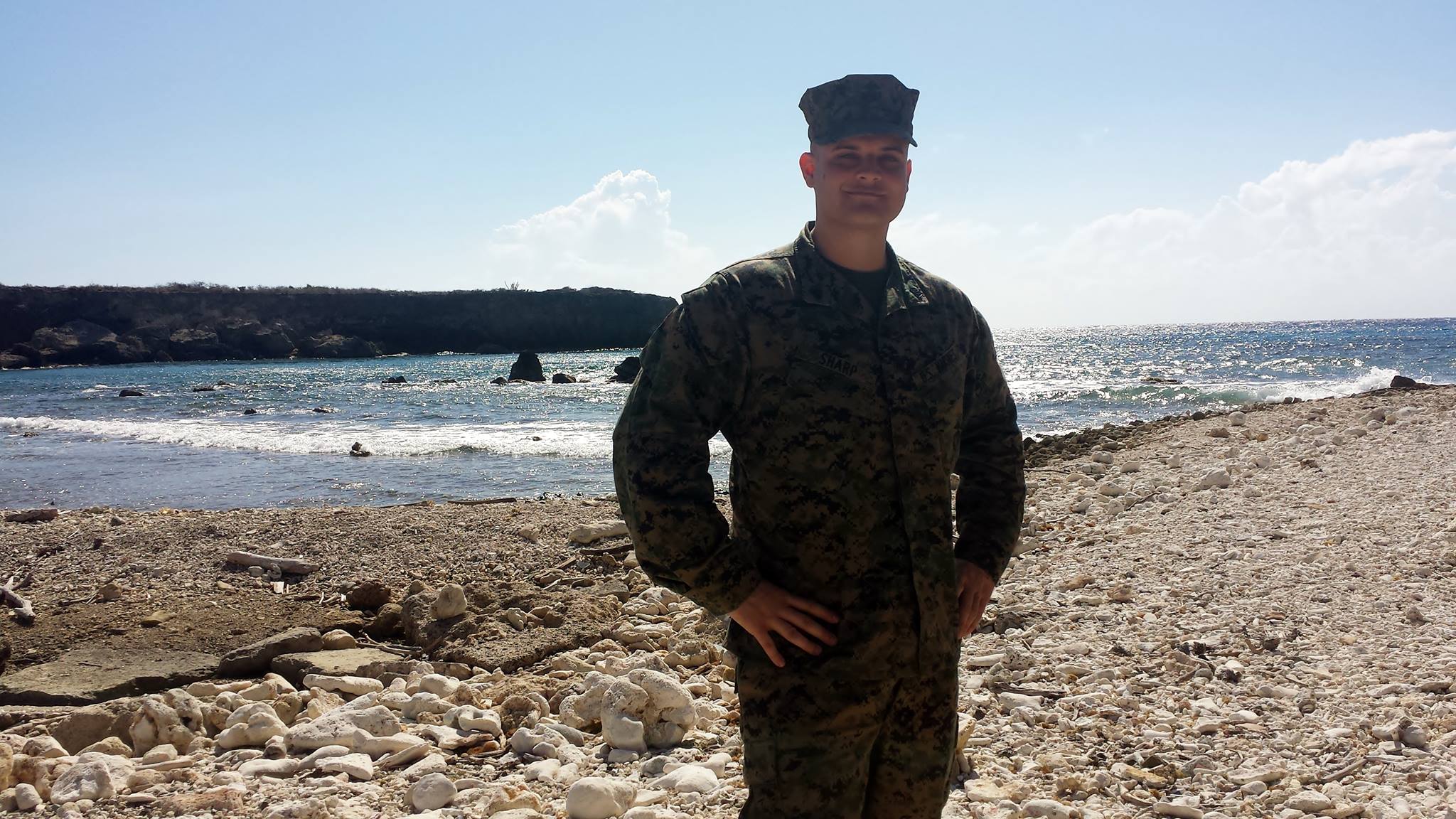 I was told by some of the Marines on post that with binoculars, you could occasionally see some Cuban soldiers keeping an eye on the base. Some Marines even claimed to have pretended to throw an imaginary baseball to the Cuban soldiers.

They claimed the Cubans were also looking through binoculars, and allegedly used an imaginary bat to return the pitch. Bored troops act much the same way regardless of the uniform they wear.

I quickly learned that at that moment, there was no large-scale threat to the base, and I felt the burning passion to know what the real Cuba was like. All I wanted to know what the other side of the fence felt like.

In May of this year, I got the opportunity to discover what I had spent six months staring at the fence wondering.

As a civilian now, and traveling under one of the 12 categories of authorized travel, I made my way to the capital of Cuba, Havana.

I had mentally prepared myself for the locals to be weary of me, and the authorities to watch me like a hawk. What I found was quite the opposite.

The locals were thrilled to talk to me, especially since I had a basic level of Spanish at my command. The police and the military barely gave me a second glance while I walked down the road. It is illegal to speak badly of the government or to take photos of military or police performing their duties, so I still gave them a wide berth.

I saw many posters and billboards dedicated to Fidel Castro and some to Ernesto “Che” Guevara. There were similar T-shirts for sale everywhere, but only the foreigners seemed to pay them any mind. I didn’t see a single Cuban wearing a Che or Castro T-shirt.

I saw miniature American Flags hanging in taxis and stores, encouraging me to come in and browse their wares.

The charming city bustled with construction and live music on nearly every road. Many of the buildings seemed in disrepair and there were construction teams everywhere frantically trying to keep up. You would see beautiful architecture and colorful buildings, then on the same street would see buildings on the verge of rubble. 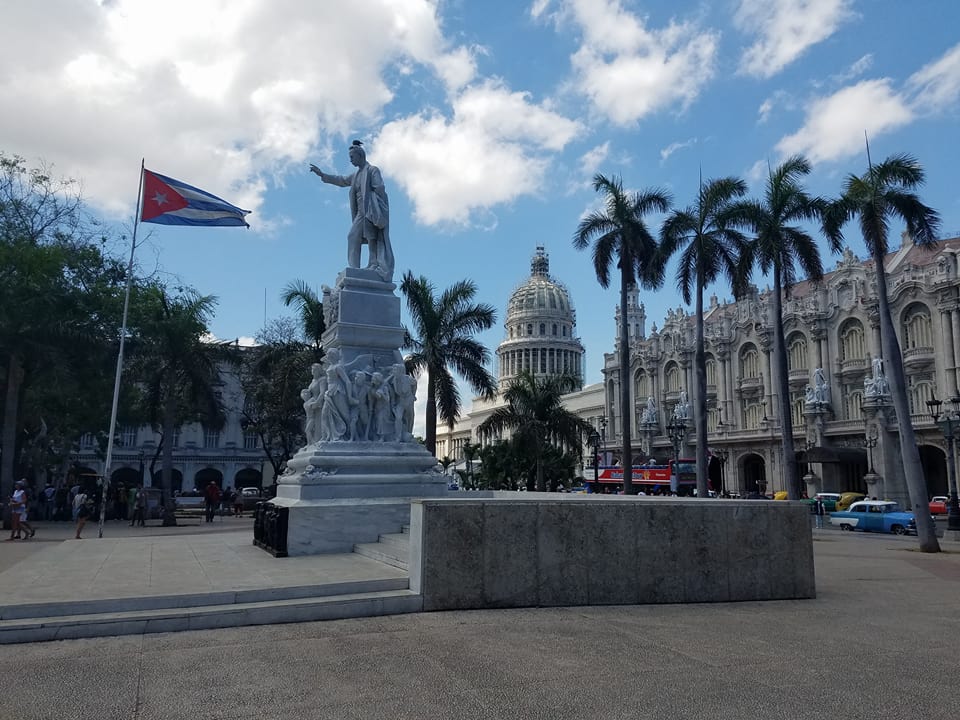 About half the vehicles were pre-1960s. The remaining half were either work trucks, vans or European compacts.

I was surprised by how many horses I saw in use for transport of goods and people. 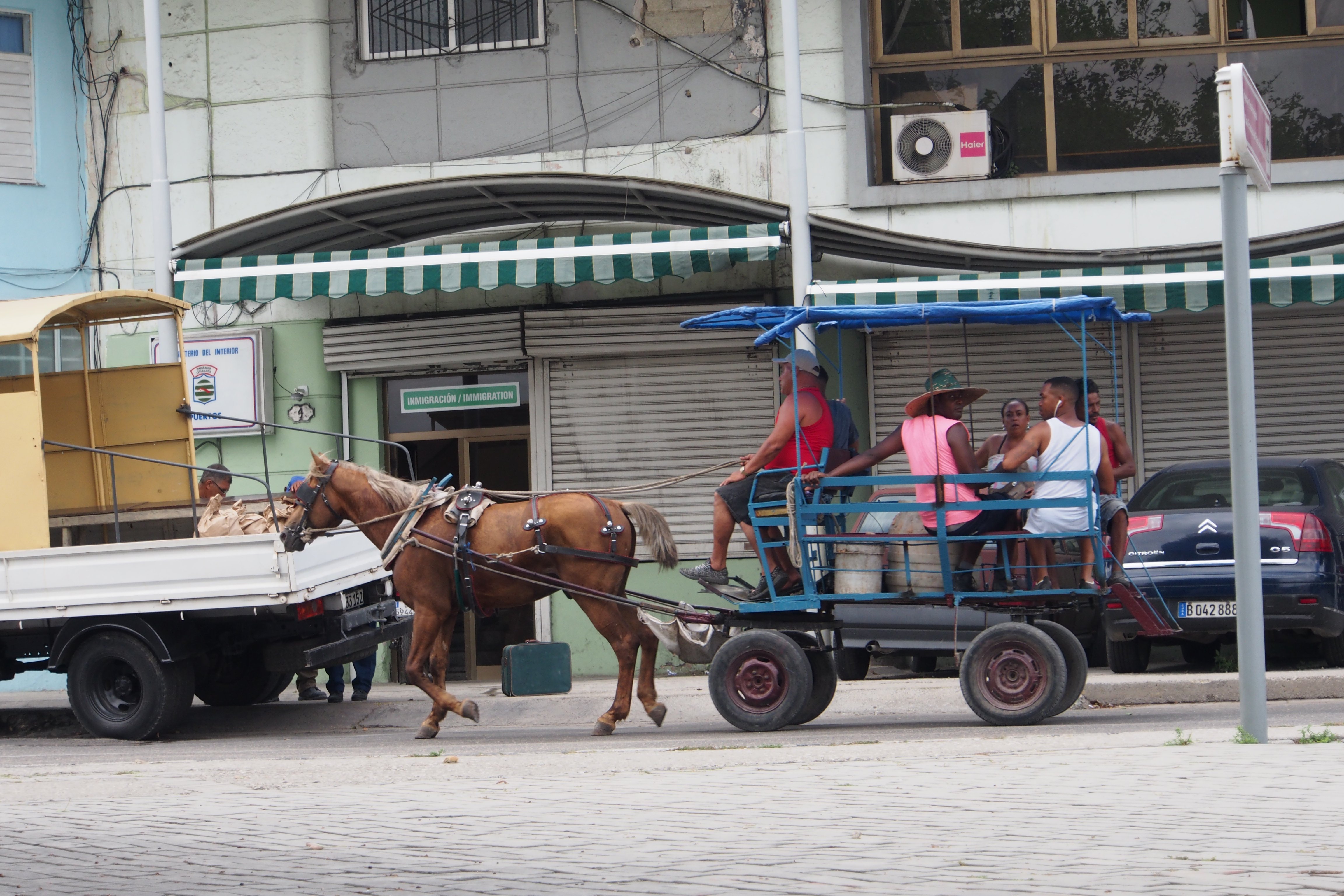 The classic cars were gorgeous on the outside. However, nothing inside them – like the seat belts, odometer or AC – worked. Despite this, laughter and conversation filled the restaurants and plazas. Everyone seemed dressed well enough, and I didn’t get the feeling they were “oppressed” the way I had envisioned they would be. 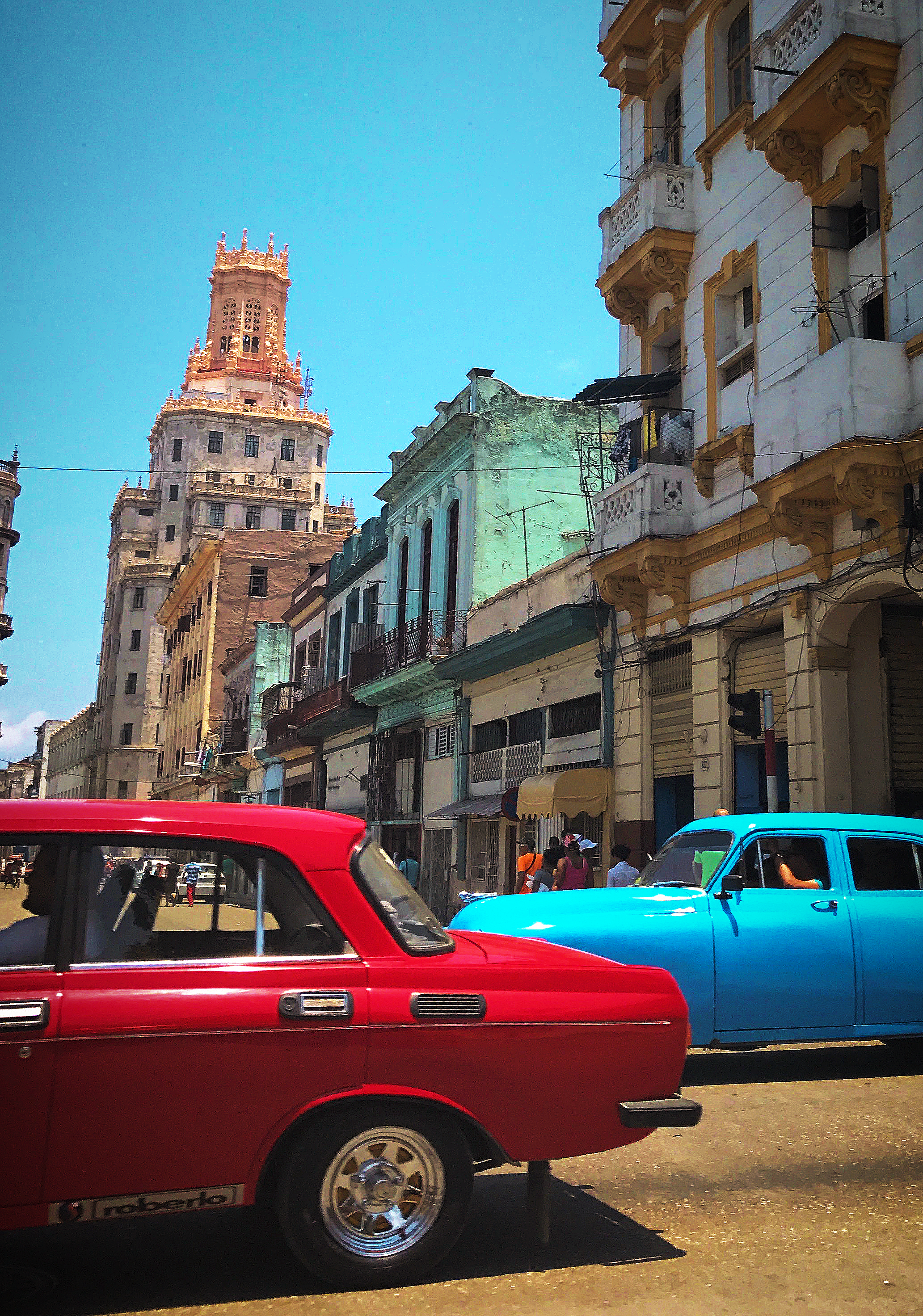 I had pictured more of a 1984-esque dystopia, with the ever-present feeling of a “Big Brother” watching. I had heard tales from the families of political refuges growing up in Florida. There was a moment when I watched a dump truck, literally filled with soldiers standing in the back, drive past me. I decided that as long as I didn’t give the government reason to notice me, I would be fine.

Even as a foreigner, I felt unrestricted in my travels around the city, and I felt very safe at night. Havana has a population of around 2 million, and the locals joked that there was one cop for every person. “So 1 million Cubans, 1 million cops” they would say, while inviting me to festivals or parties that were always “just around the corner.”

I wondered if this meant that they thought the cops weren’t true Cubans, or if they were just giving a nod to the mass amount of Cubans the police department employed.

In a discussion I had with a local woman, she gave me the best insight into the lives of the Cuban people I had received. She said something that translated to: “We have nothing, but we are happy.” 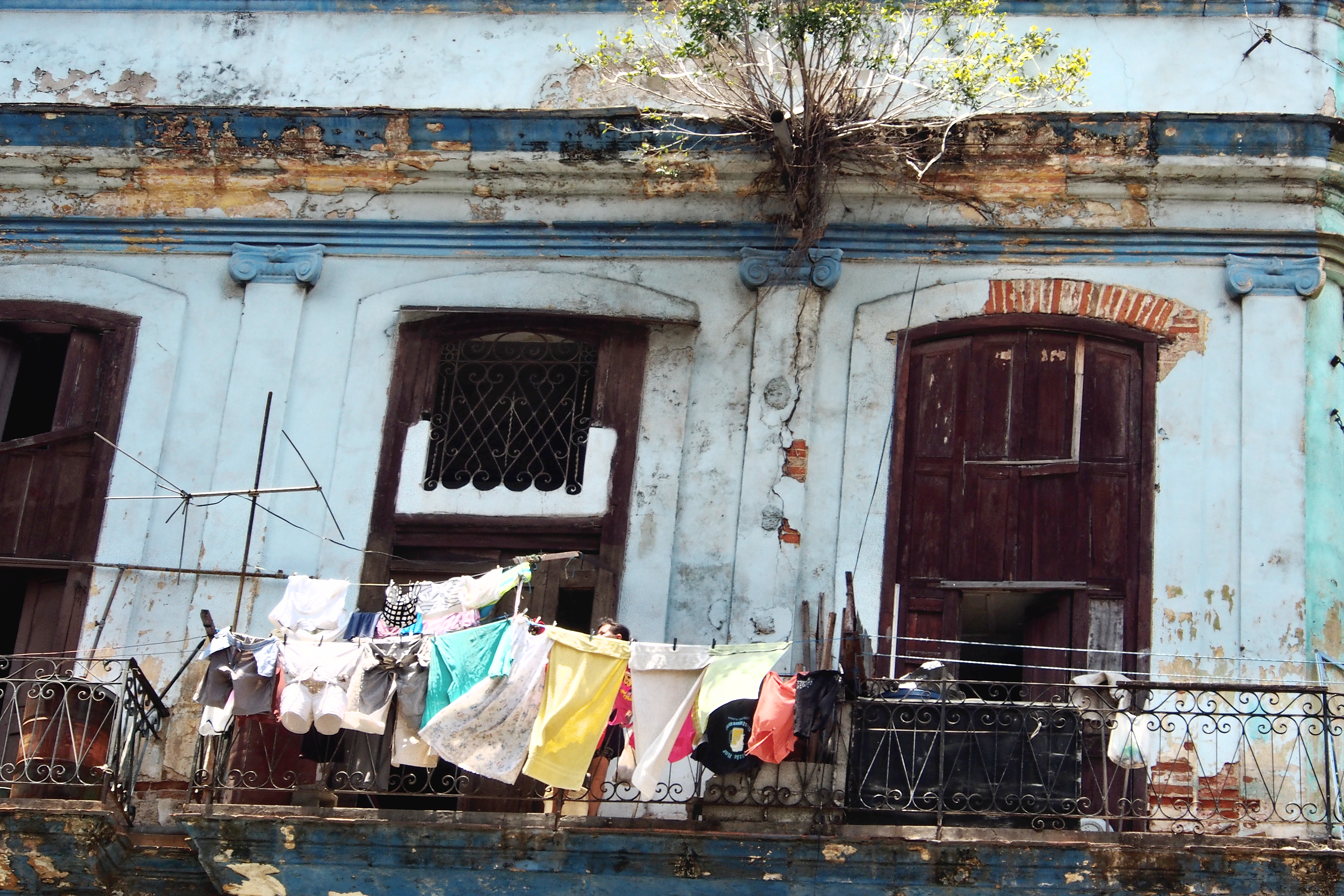 At that moment I realized something powerful. The true heart of the Cuban people was the fact that there were indeed problems in Cuba, but the people here were just like anywhere else – just human beings trying to make the best of what they had.

They don’t have the same rights to speak out against their government as Americans do. But despite this, they press on, and make the best of it.