President Donald Trump earlier this week told the Department of Defense to dictate the troop levels in Afghanistan, and now the military will have “greater agility to conduct operations,” according to the Defense Department.

There are currently about 8,400 troops in the country.

Mattis told the Senate Armed Services Committee on Tuesday, during a hearing on the Department of Defense budget, that “[w]e are not winning in Afghanistan right now […] And we will correct this as soon as possible.”

Mattis promised to deliver a new military strategy for the continued war against the Taliban in Afghanistan to lawmakers by mid-July, a timeline that is already months behind what Congress had expected. 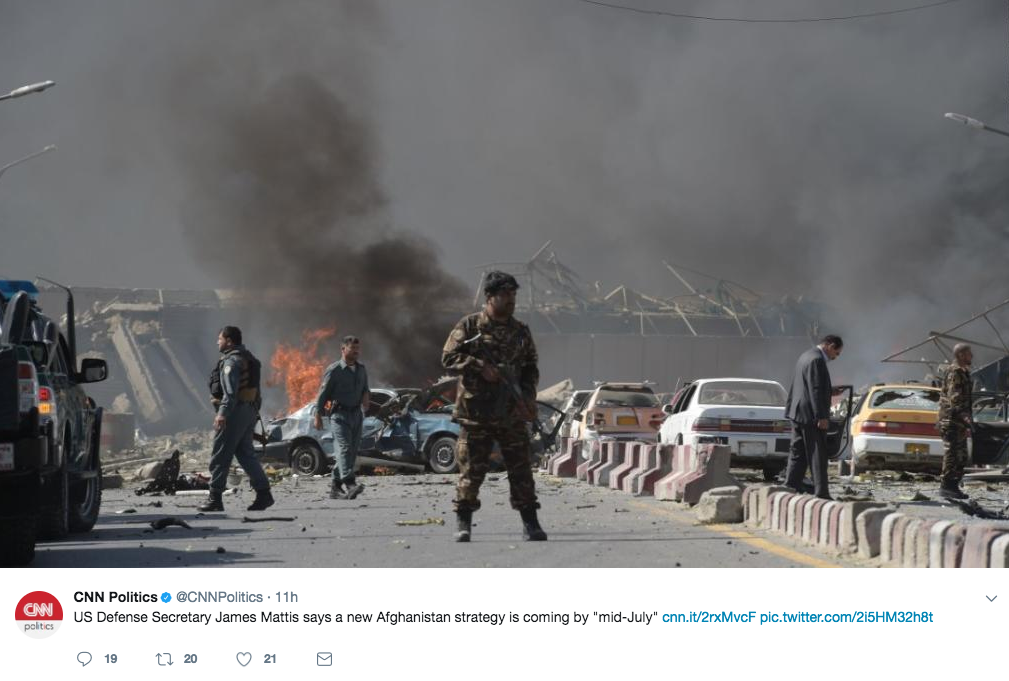 President Donald Trump has proposed a $639 billion defense budget, which includes $574.5 billion in the base budget and $64.6 billion in the Overseas Contingency Operations (OCO) budget, according to the Department of Defense.

The Chairman of the Armed Services Committee, Sen. John McCain, asked Mattis if the U.S. needs “a change in strategy, and an increase in resources if we are to turn the situation [in Afghanistan] around.”

“We recognized the need for urgency,” Mattis replied.

“Thanks to the vigilance and skill of the U.S. Military and our many allies and partners, horrors on the scale of Sept. 11, 2001, have not been repeated on our shores,” Defense Secretary James Mattis said in a statement on Wednesday.

“However, the danger continues to evolve, and that danger requires a commitment to defeat terrorist organizations that threaten the United States, other nations and the people of Afghanistan,” Mattis said. “This administration will not repeat the mistakes of the past. We cannot allow Afghanistan to once again become a launching point for attacks on our homeland or on our allies.”

Terrorist groups – including al-Qaida – remain active in Afghanistan; the Islamic State of Iraq and Syria, commonly referred to as ISIS, is now established in the Khorasan province, and the Taliban also challenges the government in the country, according to Mattis.

Defeating terrorists will happen “only by giving our men and women on the ground the support and the authorities they need to win,” Mattis added.

“Our core mission will remain the same: to train, advise and assist Afghan forces,” the Defense Secretary said. “We are there to help defeat a common enemy and ensure Afghan forces can safeguard the future of their country.”

Mattis and the Defense Department will “present this [the strategy] to the president in the coming weeks.”

“We will continue to work with our allies, and we will ask more of them,” he said. “Working with the Afghan government and our allies and partners, we will achieve victory against the terrorists abroad, protect our borders at home, and keep America safe.”