Brig. Gen. Austin Renforth is both facing criticism and receiving support for his comment during a recent interview that the Marine Corps is looking for women who play with lacrosse and hockey sticks, rather than Barbie Dolls.

“I think we’re trying to find, recruiting-wise, those women who were handed lacrosse sticks and hockey sticks growing up, and not Barbie dolls,” he said during the interview. “We don’t always get that.”

Renforth is the commanding general of the Marine Corps Recruit Depot at Parris Island, S.C.

The quote received major backlash online, with some women feeling as though the generals comments overstepped a boundary.

One female commenter, Rosemary Gregorec, wrote on Facebook, saying, “I held neither a hockey stick or a lacrosse stick (hell didn’t even know the sport existed until 2015). I figure skated – and golly gee – I BECAME A MARINE and I’m not a lesbian, I’m not a ‘jock,’ ‘tomboy,’ ‘radical feminist.’ [W]ith all due respect Gen – take your stereotypes and stuff it, sir.”

A retired lieutenant colonel and former commander of Parris Island’s all-female Fourth Recruit Training Battalion, Kate Germano, said Renforth’s comments were “terrible,” and that he should have been corrected.

“It doesn’t surprise me that it would be an attention gainer because the comments that Renforth made were so terrible,” she said. “It feeds into that narrative that women are weaker, that they’re less emotionally stable.”

After an investigation about Germano being too hard on recruits and subordinates, she was relieved from her command in 2015. She believes her firing was backlash after she successfully helped bring up female recruits’ rifle range scores and encouraged a competitive mindset in her unit, according to the report.

But some jumped to Renforth’s defense, saying the statements were not crass, but true.

“The problem with backlash like this, is that it makes officials afraid to tell the truth to the media,” one unidentified Marine close to Brig. Gen. Renforth told American Military News. “As long as I have known him, he [Renforth] has been an outstanding Marine and leader. He has done his job right, time and time again, because he knows what it takes to get it done the right way.”

“We need more leaders who are willing to stand up and say what they really think, instead of hiding behind a blanket of political correctness [PC], the very same PC culture that will eventually get our men and women killed overseas and make a laughing stock of our armed forces,” the Marine said.

Another person, Toni Lea Curry, commented on Facebook saying that, “His ‘walk back’ wasn’t for the benefit of military members, it was for the media. It’s not in the best interest of the Marine Corps Public Affairs to have the public criticizing them [the Marines] for being sexist.”

“I’m pretty sure no one in the Corps gives a rat’s left hind leg what toys any Marine played with as a child, as long as he or she is competent to do the job he or she has now,” she added. “He [Renforth] was just saying the adjustment period from civilian to Marine is often different for women than it is for men because of cultural expectations.” 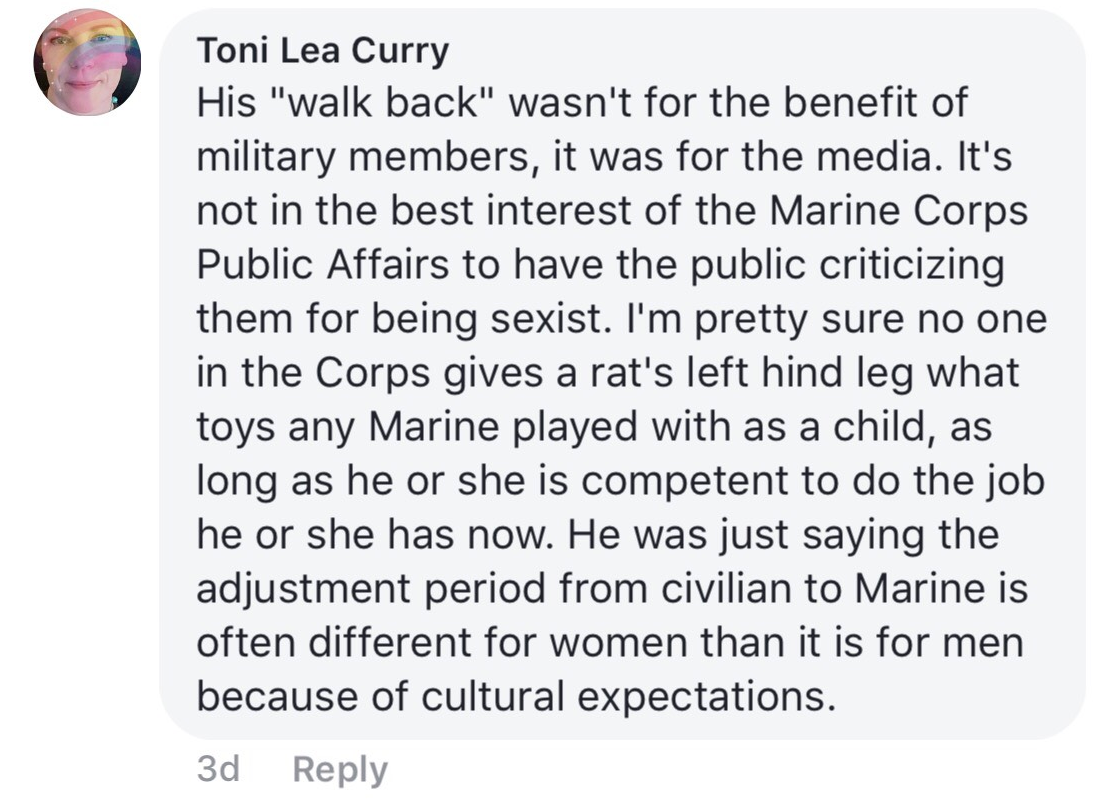 At the time of writing, Renforth was not facing any negative actions regarding his comments.