Iraq has retaken an historic mosque in Mosul that was the self-proclaimed caliphate, or area ruled by a Muslim leader, of the Islamic State, according to reports. 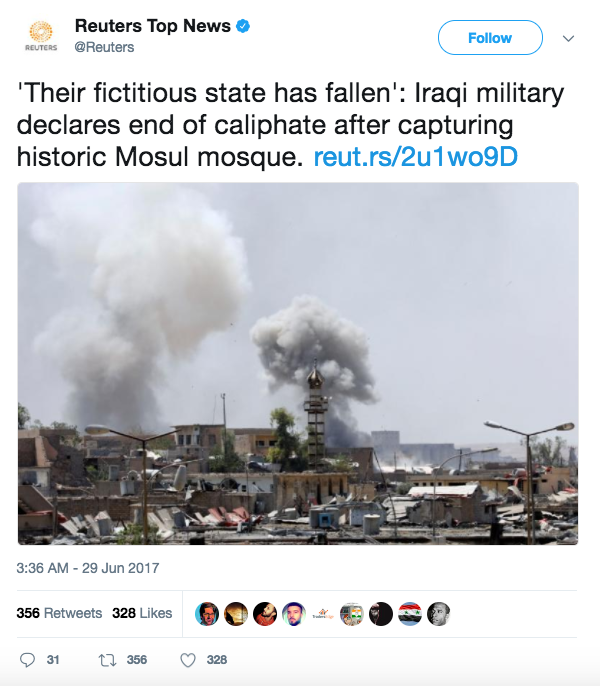 “The return of al-Nuri Mosque and al-Hadba minaret [the mosque’s tall, leaning tower known as ‘the hunchback’]  to the fold of the nation marks the end of the Daesh state of falsehood,” said Prime Minister Haider al-Abadi, according to Reuters.

ISIS, which had flown its black flag from the minaret on the mosque since June 2014, can no longer claim the major city in northern Iraq as its caliphate.

Frank Gardner, a BBC correspondent, tweeted that this was an “[extraordinary] collapse in ISIS fortunes since its heyday 3 yrs ago.” 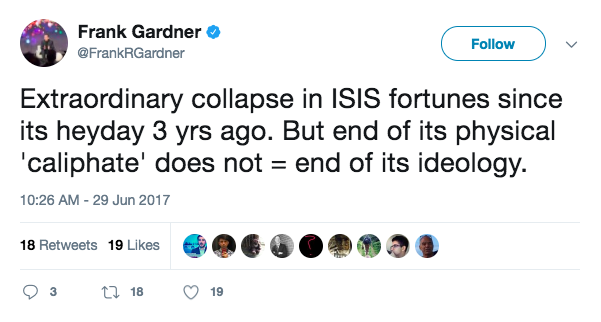 “But end of its physical ‘caliphate’ does not [equal the] end of its ideology,” Gardner added.

About two-thirds of the population in Iraq is Shiite. ISIS is a Sunni terrorist group. The two groups have an historic, deep-rooted rift. The Sunnis regard Shiites as apostates, or people who have abandoned their religious beliefs. The prime minister referred to ISIS by an Arabic acronym.

There had been particularly terrible fighting for several months leading up to the capture of the Grand al-Nuri Mosque.

ISIS blew up the mosque and its “hunchback” tower last week. U.S.-backed Iraqi forces had reportedly begun closing in.

CNN reported that while “ISIS is likely to be ousted from Mosul with days, […] the fight remains difficult.” 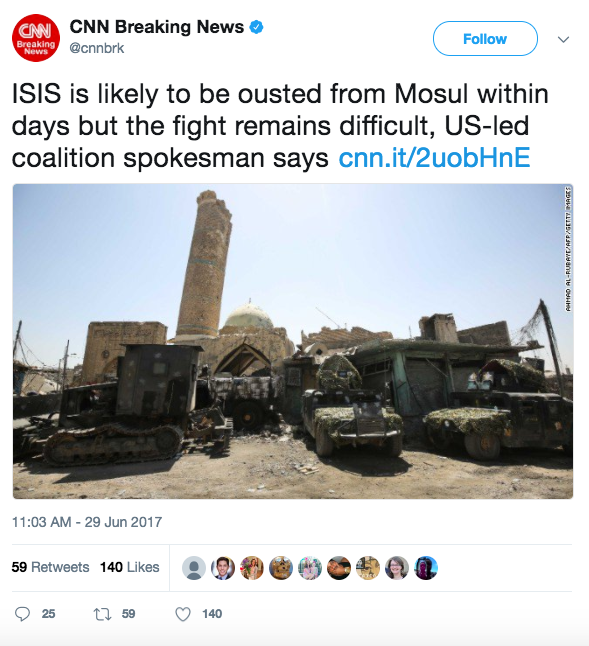 Coalition Spokesman Col. Ryan Dillon told CNN that Mosul’s liberation is “imminent,” and he confirmed that Iraqi forces has seized the remains of the mosque and minaret.

The Islamic State stronghold in Raqqa, a city in northeast Syria, is also reportedly close to falling, as it is reported that U.S.-backed forces have surrounded the city.

While the Islamic State does still rule over territories in other parts of Iraq, “[these] setbacks have reduced [the] Islamic State’s territory by 60 percent from its peak two years ago and its revenue by 80 percent, to just $16 million a month,” according to IHS Markit, an analytics firm, Reuters reported.

IHS Markit also said ISIS occupies an area across Iraq and Syria that is “as big as Belgium,” Reuters reported.

According to a Reuters TV reporter, the mosque and minaret are now mostly rubble.